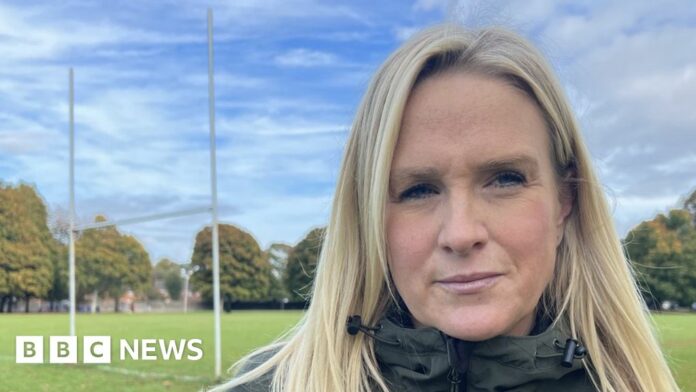 A former boss at Welsh women’s rugby said she considered suicide because of what she claimed was a “toxic culture” of sexism at the Welsh Rugby Union.

Charlotte Wathan also said a male colleague said in front of others in an office that he wanted to “rape” her.

Another female former WRU employee, a mum of one, said she wrote a manual for her husband in case she killed herself.

The WRU said that both cases were investigated and proper procedures were followed.

One MP, also a former Wales player, warned the allegations against a major UK sporting organisation were “on a level” with the racism scandal that rocked Yorkshire Cricket Club.

Tonia Antoniazzi has written to the Prince of Wales as patron of the WRU for a meeting to “create a better future for women and girls in rugby in Wales”.

Ms Wathan, the former general manager of Welsh women’s rugby, said she cried after the alleged rape comment was made towards her at the WRU’s Vale of Glamorgan training base in 2src19.

“Someone referring about me in an office environment that they wanted to rape me,” she told the BBC Wales Investigates programme.

“Take me back to the hotel, tie me to the bed and rape me. I remember feeling sick, like a punch to the stomach. I remember standing in shock thinking, ‘did I just hear that?’

“And everyone’s laughing, and there was a senior member of staff there. I left the room and I burst into tears. I thought ‘crikey, is this what it’s come to?'”

The comment was eventually investigated by an external lawyer after Ms Wathan raised it with the WRU as part of a wider grievance, but the BBC has discovered a number of key witnesses, who she said could corroborate her allegations, were not spoken to as part of that investigation.

The man who allegedly made the comment also was not spoken to as part of the grievance. He still works at the WRU.

But the WRU and Ms Wathan, who left the organisation early in 2src22, reached an “amicable resolution” last month and a planned employment tribunal case was withdrawn.

The WRU told the BBC Ms Wathan’s allegations remained unsubstantiated following a thorough independent legal investigation and that it could not comment further because her case had been settled since her interview with the BBC.

But it added it took any allegations from staff regarding behaviour, attitude and language seriously and if any allegations were substantiated it would act swiftly. It said such behaviour had no place in the WRU or Welsh rugby.

Ms Wathan said she told the WRU in 2src21 the culture was “toxic” and she was too ill to return to work due to the impact on her mental health.

“You just, at that point, think there’s no hope. And nobody wants to take this seriously.

“This was probably one of the worst experiences of my life and it was dark. It was grim. And it could have cost me my life.

“I could have left my children without a mum, just because I was trying to develop the women’s game.”

Another female former WRU employee, who wants to remain anonymous, also alleged she suffered sexism and bullying by a manager within the organisation and left in 2src18.

The second woman described her time at the organisation

…. to be continued
Read full article at the Original Source
Copyright for syndicated content belongs to the linked Source : BBC News – https://www.bbc.co.uk/news/uk-wales-64333230?at_medium=RSS&at_campaign=KARANGA