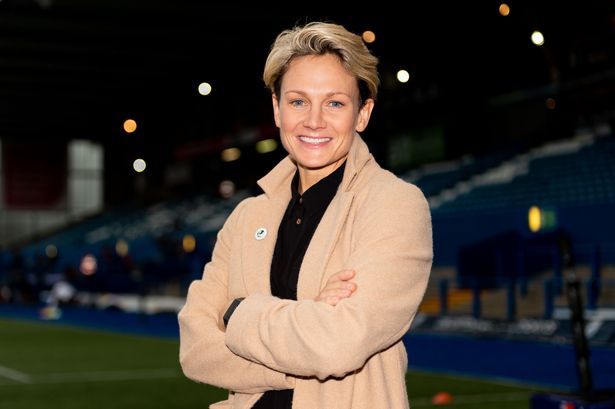 It was, by the general standard of work-life balance mishaps, textbook. Arguably cinematic. It’s not difficult to imagine throwback versions of Meg Ryan or Renee Zellweger doing similar on the big screen: confusing the date and location of a work assignment with that of her best friend’s 4srcth birthday celebration.

Not that that sort of removed reflection prevented rugby commentator and former Wales international Philippa Tuttiett from feeling an acute sense of dismay drop 1src stories through her stomach last year as the airplane pilot announced over the tannoy that the plane she was on had indeed landed in Malaga, a city on the Spanish Mediterranean coast which had unprecedentedly hosted the World Rugby Seven Series in 2src22, and – upon a quick Google Map calculation – was a mere 5srcsrc miles away from the Majorcan resort of Magaluf, where Tuttiett’s best friend was celebrating her 4srcth birthday with a strictly all-girls weekend.

A strictly all-girls weekend that Tuttiett was strictly meant to be part of.

SIGN UP: Get the latest exclusive stories and breaking rugby headlines sent straight to your inbox for free with our daily newsletter

“I had arrived late, so I phoned my mate in the morning and she was like ‘you coming down to breakfast?’ And I was like ‘yeah, I’m at breakfast but I’m not at your hotel…” Tuttiett shakes her head in a perfect blend of genuine and faux embarrassment. “So yeah, that’s testament to how hectic it is. I flew to the wrong place for my mate’s birthday.”

We’re not five minutes into our meeting over Zoom before Tuttiett discerns the time has arrived for this confession, which is more of a reflection of the Welshwoman’s character than any scheduling calamity.

Tuttiett is cheerfully candid, affable and more than anything, wonderfully relatable through any medium: attributes which have made her one of the top rugby commentators in the game this past 12 months alone. But the confession also serves a more straightforward purpose in offering a glimpse into the frankly hectic year which has just passed for the former rugby player-cum-commentator/presenter/mentor/building entrepreneur.

After a year of Covid-19 which threatened to derail the small foot in the commentary door Tuttiett had built following her official retirement from rugby in 2src18, Tuttiett has relished a year of mini-milestones being struck one after the other: from commentating on the Rugby World Cup Sevens, the Commonwealth Games, the United Rugby Championship, the Allianz Premier 15s to the Women’s Rugby World Cup in New Zealand (including the thriller of a final between England and New Zealand), all while juggling her all female-driven building company Female Builders and Interiors, having a family and trying to find time to take her best friend out for an apology dinner date.

The exhilaration has been incessant, the challenges hefty and the travel nonstop. When asked how many countries she visited, an exact number evades Tuttiett, only that “it was to the point that my mum would phone me and she wouldn’t be surprised if it was a foreign ringtone”.

Tuttiett wouldn’t have it any other way. In fact, she knows this dance well. Throughout her club, regional and international rugby career, she balanced being the first female builder on national TV for Channel 4, Channel 5 and UKTV, buying a new house, having her family and establishing her building company.

As far as blueprints for manic lifestyles go, Tuttiett’s is as good as any. Albeit, by law of averages, a mix-up was on the cards. As a player, she was allowed to become “lazy” when she globetrotted. “The manager does everything. You’re told to turn up with your passport and your bag. Beyond that, you’re like a child. Follow.”

This past year, not so much. But Tuttiett’s word choice is unconsciously ironic. If there is one thing that becomes immediately clear as Tuttiett speaks about her life, it is that Tuttiett does not follow well.

As a female rugby commentator, she represents a vanguard in a sporting genre traditionally dominated by men. Her building company is the only one of its kind. That she was often the only woman on building sites has been a near guarantee since she slammed hammers against walls as an eight-year-old alongside her father.

Tuttiett does not play coy that her life has seen her boldly, and simultaneously, occupy historically male-dominated domains. But she makes clear that she didn’t dedicate her life to hyper-female crusades, despite what optics suggest.

“To be honest, I think the reason I’ve been able to have careers in very male-dominated industries is that, and it’s as simple as, I don’t really think that much about it,” Tuttiett says.

Of her time as a kid on the building site with her self-employed dad Rob, she says: “They’d stare at me and look. I’d sort of stare back and they’d stop. And I’d carry on. I didn’t realise that it was unusua

…. to be continued
Read full article at the Original Source
Copyright for syndicated content belongs to the linked Source : Wales Online – https://www.walesonline.co.uk/sport/rugby/rugby-news/philippa-tuttiett-rugby-commentator-wales-26021313