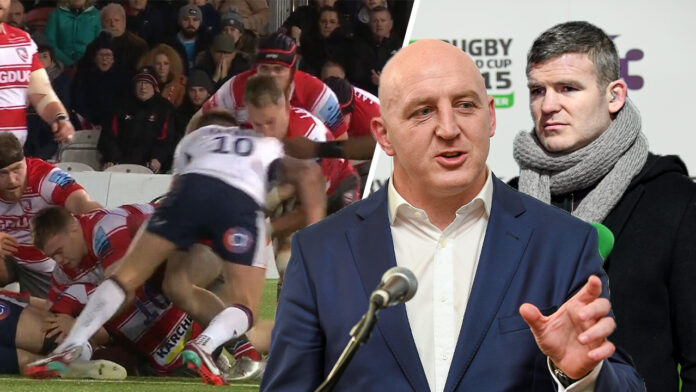 Rugby cannot afford to have a ‘grey area’ when it comes to head contact, according to Irish legends Gordon D’Arcy and Keith Wood.

The pair joined Joe Molloy on Wednesday Night Rugby where they discussed inconsistencies in relation to red cards being issued for head-on-head collisions.

Owen Farrells high tackle on Gloucester replacement Jack Clement in the Premiership clash last Friday has brought about a debate. The England out-half was handed out a four-match ban, but that will be reduced to a three-week suspension if he takes part in the World Rugby Intervention Programme.

Should Borthwick name the England captain in his initial Six Nations squad, his ban will affect the championship opener.

However, if he is omitted from Borthwick’s first squad and named as eligible for Saracens’ clash with Bristol a week before the start of the Six Nations, then Farrell will not play against Bristol and will have served out his three match ban to be available for the clash with Scotland.

As part of the mitigation down to three weeks, Farrell’s trip to ‘tackle school’ is intended to force a change to his tackle technique.

However, D’Arcy has faced Farrell, and does not expect him to change his game.

‘’Owen Farrell isn’t going to change his tackle technique,” D’Arcy said. “I remember being tackled by him and it is the exact same thing he goes for an impact tackle but him and Johnny Wilkinson had similar tackle techniques, but it is the most impact and trying to stop you on the gain line.

“He hits you so hard pound for pound and that’s way he’s tackled his whole life and he’s not going to change.’’

Ex-Munster star Keith Wood outlined the fact that the England star doesn’t have a bad disciplinary record, in spite of his reputation for poor tackle technique.

‘’All fans would probably s

…. to be continued
Read full article at the Original Source
Copyright for syndicated content belongs to the linked Source : Newstalk – https://www.newstalk.com/sport/farrell-high-tackle-darcy-wood-rugby-red-cards-1418730