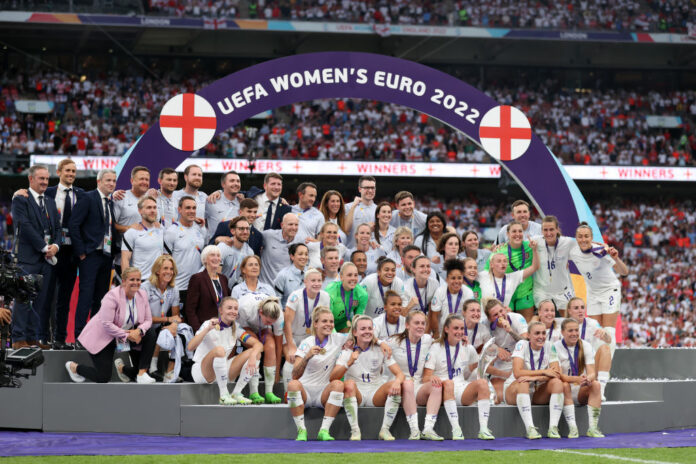 After the success of the Lionesses, City A.M. looked at what rugby can learn from women’s football as England look to host the 2025 Rugby World Cup. Article originally published 9 August 2022.

But in a few years’ time England will be doing it all over again. This time, however, it will be with the oval ball.

It was confirmed this year that England would host the next women’s Rugby World Cup in 2025, so what better blueprint can there be than the Lionesses to show the Red Roses just how it can, and should, be done?

“We know that the appetite is there, both from a fan and participation point of view,” the Rugby Football Union’s head of women’s game Alex Teasdale told City A.M.

“The issue that the Euros and tournaments such as the women’s Cricket World Cup in 2017 is helping to unlock is that accessing women’s sport hasn’t been as easy as it should be.

“The broadcast partnerships that have been in place for the Euros and Women’s Super League have allowed so many more people to access women’s sport.”

English rugby has recently signed a deal with the BBC which puts the Women’s Six Nations and some domestic top-flight games from the Premier 15s on terrestrial television.

The women’s World Cup, too, later this year will be on a free-to-air platform.

…. to be continued
Read full article at the Original Source
Copyright for syndicated content belongs to the linked Source : CityAM – https://www.cityam.com/best-of-2022-what-can-england-rugby-learn-from-the-lionesses/