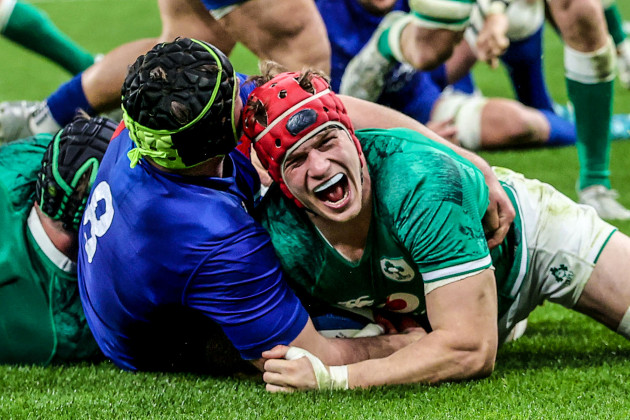 IRELAND AND LEINSTER back row Josh van der Flier has been named World Rugby men’s player of the year.

Sexton was among the nominees again this year, as were France scrum-half Antoine Dupont and South Africa centre Lukhanyo Am, but van der Flier collected the top prize at World Rugby’s awards ceremony in Monaco.

The Wicklow man has been sensational throughout a brilliant 2src22 for Ireland, starting all five games in the Six Nations as they claimed a Triple Crown, all three Tests in their summer series success in New Zealand, as well as the two recent autumn wins over South Africa and Australia.

Van der Flier has been ultra-consistent as he has taken his game to a new level, improving every single aspect of his skill set and making a dominant impact against the best teams. The 45-times capped flanker has been superb for Leinster too.

While Sexton wasn’t picked for men’s player of the year, the 37-year-old was included in the World Rugby men’s 15s dream team along with van der Flier, Tadhg Furlong, and Tadhg Beirne.

Van der Flier wasn’t the only Irish winner of an individual award in Monaco as Terry Kennedy was announced as the men’s 7s player of the year.

Ireland boss Andy Farrell missed out as coach of the year, while Dan Sheehan and Mack Hansen were pipped in the men’s breakthrough player of the category.

…. to be continued
Read full article at the Original Source
Copyright for syndicated content belongs to the linked Source : TheJournal.ie – https://www.the42.ie/world-rugby-awards-2022-5925213-Nov2022/