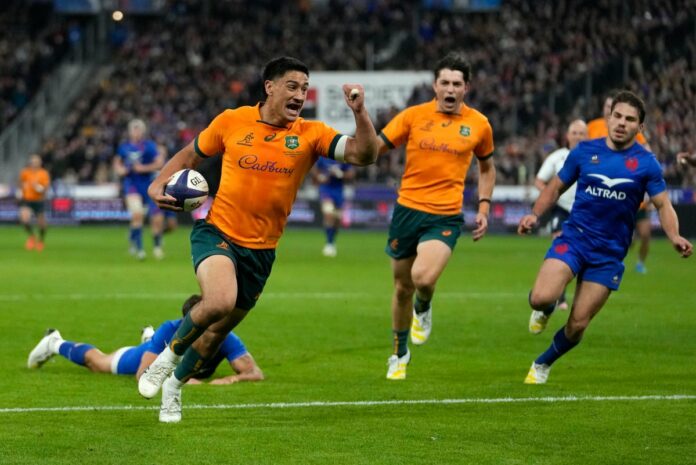 Damian Penaud scored a late try to give France a hard-fought record 11th consecutive victory as they beat Australia 30-29 at the Stade de France in their autumn international on Saturday.

The Wallabies’ Lalakai Foketi scored a sensational try and Jock Campbell added another with Bernard Foley kicking the rest of the points for the visitors, who did a great job at keeping France‘s mercurial scrumhalf Antoine Dupont in check.

Fabien Galthie’s side however ground through the game and winger Penaud scored the winner to add to Julien Marchand’s try, while Thomas Ramos’s metronomic boot secured their other points.

France, who take on South Africa in Marseille next Saturday, improved on their record of consecutive victories that dated back to the 1930s.

Having not played together since the last Six Nations tournament as the squad who toured Japan in July was largely reshuffled, France lacked their usual bite but somehow pulled off a victory after a rough battle.

Australia, who had recalled experienced flyhalf Foley in August, defended stoutly and attacked when it mattered, only losing their way in the final five minutes.

Foley put the visitors ahead with an early penalty as Australia started strongly, only for Ramos to cancel out the advantage with a 30-metre penalty and then give Les Bleus the lead with a 48-metre kick.

After Foley’s second penalty, France touched down through Charles Ollivon, only for the try to be ruled out for a double movement. Minutes later, Australia effectively scored the first try at the end of a blistering counter attack, Foketi diving over after collecting Tom Wright’s pass inside the French 22.

France had a spell of domination and were rewarded with two Ramos penalties but for the first time in four years Les Bleus faced the prospect of being behind at halftime at the Stade de France.

However, Marchand scored a pivotal try in stoppage time from a strong ruck and Ramos added the extra points to give France a six-point lead at the interval with the score at 19-13.

Foley and Ramos traded penalties early in the second half, but Australia struck the first blow when Campbell went over after a fine collective move before Foley converted to give the Wallabies a one-point advantage and fresh momentum.

Foley kicked for three points again before Ramos also did so and, with five minutes left, Hodge added another penalty to leave France with a try to score for a win that looked elusive.
But Penaud beat two tackles to touch down with four minutes left and gave his team another confidence boost a year before the World Cup on home soil.

…. to be continued
Read full article at the Original Source
Copyright for syndicated content belongs to the linked Source : Independent – https://www.independent.co.uk/sport/rugby/rugby-union/france-australia-live-stream-score-result-b2218055.html