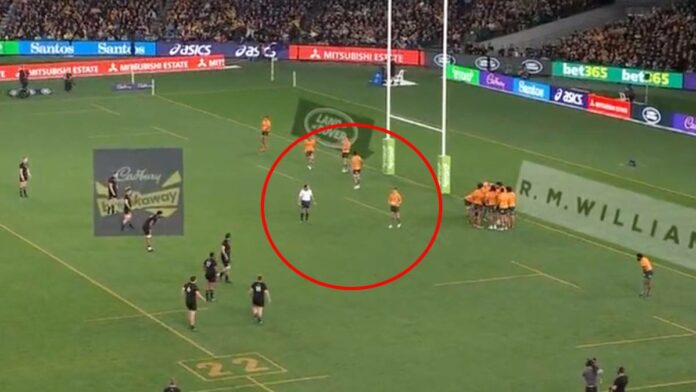 The Australian is reporting that Rugby Australia have sent a ‘please explain’ over the decision lodging a formal complaint.

New Zealand’s 39-37 defeat of Australia on Thursday turned out to be one of the most controversial rugby test matches ever witnessed after the All Blacks were saved from the clutches of defeat by a rarely, if ever, seen call from Raynal.

A long-range Nic White penalty goal had given Australia a lead for the first time with three minutes remaining after the side surged back from 31-13 down on the scoreboard. The All Blacks then had a chance to level with a late penalty but opted for a try from an attacking lineout and conceded a penalty themselves.

Raynal then awarded the match-turning infringement against Bernard Foley for taking too long to kick the ball from the penalty.

Former Wallabies centre Tim Horan has weighed in on the controversial decision claiming Foley couldn’t have heard the referee’s pleas to kick the ball, given “he was 15, 20 metres away”.

Speaking to D’Arcy Waldegrave on NewstalkZB on Friday, Horan attempted to explain why Foley’s teammates were seen shouting and urging the five-eighth to kick the ball into touch by claiming Raynal was too far away to hear, whereas the vocal members of the backline were closer.

“The referee was standing out that side, near the two centres, and that’s why they were screaming, because they could hear him but Bernard Foley, who’s 15, 20 metres away, he couldn’t hear him,” Horan said.

“In a closed stadium, 50-odd thousand people, the referee’s got to communicate that better: run over to Bernard Foley, stop the clock and say ‘Bernard, you’ve got to kick this out in the next second otherwise I’m gonna give a penalty’.

“If he gets to Bernard Foley, he explains it, there’s no problem, Bernard Foley kicks the ball out with 60 seconds to go and the All Blacks still have a chance to win that lineout and to win the test match.”

However, footage circulating widely on the internet appears to show that Raynal, in fact, communicated with Foley exactly the way that Horan suggested and that Foley was the closest player to him – and certainly much closer than 15 metres – on the field by a margin.

In fact, the on

…. to be continued
Read full article at the Original Source
Copyright for syndicated content belongs to the linked Source : New Zealand Herald – https://www.nzherald.co.nz/sport/news/article.cfm?c_id=4&objectid=12552890&ref=rss