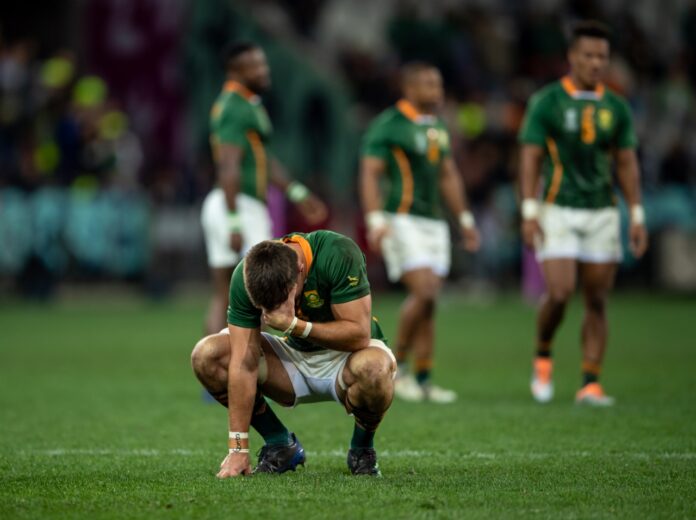 Neil Powell’s nine-year tenure as Blitzboks coach will fizzle out on the final day of Rugby World Cup (RWC) Sevens 2022, with two matches in the fifth- to eighth-place playoff section.

South Africa’s Sevens team was a tournament favourite, which they backed with a convincing 32-5 win against Chile in the Round of 16 match on Friday evening. But now they play Argentina on the final day with, at best, a fifth place finish.

The disappointing result against the Irish follows the Blitzboks’ recent woeful performance two weeks ago, where they finished 13th in the Los Angeles leg of the World Series — their poorest finish under Powell’s tenure.

The 13th place meant the Bok Sevens squandered the opportunity to seal the World Series title, after leading for eight of the nine tournaments.

The side does, however, end the season with some silverware, after clinching gold in the Commonwealth Games.

But a season that could have, and probably should have, ended with at least two trophies will now only be filled with one.

Ireland kicked the very first kickoff of the match straight into touch, one of very few mistakes they made throughout their quarterfinal encounter against the Blitzboks.

South Africa responded with a crucial error of their own when Selvyn Davids failed to find touch with a penalty.

Ireland made the most of the mistake, going coast to coast with the Blitzboks defence, before Mark Roche dotted down under the sticks for the Irish to take an early 7-0 lead.

The Blitzboks spurred an opportunity to hit back immediately when Ronald Brown overcooked a pass to Sako Makata, who had an open tryline ahead of him, one of several costly mistakes made by the Blitzboks.

Trying to relieve the pressure on their line, Ireland overshot a lineout throw in their own 22, which JC Pretorius collected before being stopped inches from the line.

From the resulting ruck, Brown corrected his earlier error by drawing and passing early to give Muller du Plessis an easy run-in. Brown converted the try to make the half-time scoreline seven apiece.

The Blitzboks lineout misfired twice early in the second half, which Harry McNulty capitalised on to score an easy try.

The home side then spilled another ball in their 22, this time Pretorius was the guilty party. The Irish hopped on the resulting ball before flyer Jordan Conroy straightened the line and dotted down untouched.

Conroy then made it two in two minutes, with an excellent finish in the left-hand corner, to stretch the lead to an unassailable 24-7, with less than a minute to play.

With Conroy’s brace sealed in the 14th minute, the writing was on the wall for South Africa, as the Cape Town crowd began to make their way to the nearest exits.

With time out on the clock, Mfundo Ndhlovu put some gloss on the scoreline to take the final score to 24-14.

The win for Ireland means they will take on New Zealand in the RWC Sevens semifinal clash on the last day.

Earlier, the All Black Sevens side beat Argentina 12-5 in their quarterfinal meeting.

Fiji and Australia will play in the other semifinal.

A Nadine Roos masterclass motivated the Springbok Women’s Sevens team to a superb 27-0 victory over Colombia in the 13th/16th-place playoff match.

“She’s absolutely world class. We’ve got one or two players that could be playing for the top four teams in the world, and she’s definitely one of those players,” head coach Paul Delport said of Roos after their win.

…. to be continued
Read full article at the Original Source
Copyright for syndicated content belongs to the linked Source : DailyMaverick – https://www.dailymaverick.co.za/article/2022-09-11-blitzboks-stumble-against-inspired-ireland-at-rugby-world-cup-sevens/