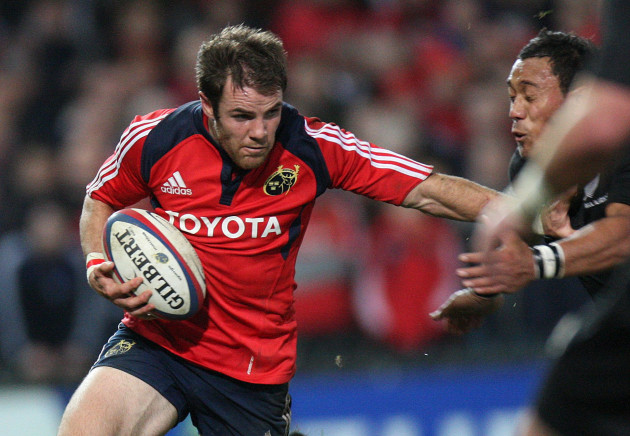 WHEN HE WAS 31, Barry Murphy was at the stage where he needed to see a psychologist.

All the dreams he ever had, the good ones and the bad, had come true. From initially hoping to just get one game for Munster, he ended up wearing the shirt 73 times. But nightmares followed, Murphy fearing this whole thing could end as suddenly as it began.

By 28 it had. He had suffered a leg-break in 2006; a dislocated ankle that same year; a broken hand in 2007; shoulder injuries, ankle ligament tears, and finally a foot injury that forced him, in 2011, to limp away from the game. The show was over, the curtains drawn.

“I never thought I’d make it as a pro, so I tried to keep telling myself I was lucky,” he says. Yet that wasn’t how he felt. A transition from a career in rugby to one in music meant he still had a crowd to entertain but when September 2014 came along, it was an audience of one he needed.

Declan Ahern, the Munster team psychologist, was the man he called, Murphy planning to tell Ahern how confused he felt, how the departure from a structured life as an athlete to a world where he had no boss, didn’t suit his personality.

“Lifestyle wise I probably went a little heavy on the wild side (after retiring),” Murphy says. “I still had it in my head that I could get back. There were some dark times but also some incredible times. Being in the band, I wouldn’t change that for anything. But this time eight years ago, I needed help.”

Ahern sat him down.

“Declan,” Murphy confessed, “I am absolutely all over the place.”

Ahern listened, the way the best sports psychologists do, and then asked one question, about the ankle injury that kept Murphy out of the 2006 Heineken Cup final.

“Is that really relevant?” Murphy asked.

Soon he realised it was, how the way he was feeling in 2014 had its origins in the things he missed out on in 2006, namely a place on the European Cup winning team, the chance to write his own name in history. “I never dealt with it at the time,” Murphy says.

Now he had to.

Munster celebrate their 2006 win – a game Murphy missed out on.

It was a September day, just like this one, and that’s no coincidence. All around Ireland this morning, there are countless former players going through a quiet kind of hell, knowing that as a new rugby campaign is about to kick off, their personal season is in eternal winter, a sporting Arendelle.

They all suffer. The Barry Murphys, the Brian O’Driscolls. “My worst fear,” O’Driscoll told Richie Sadlier on BT Sport earlier this week, “is that life has peaked.”

For Murphy, it wasn’t just that. It was the fact he’d sat in the stand for the 2006 Heineken Cup final when he could have been on the pitch; the fact he had found confidence at 28 after a decade of doubt, the end coming just as his form was peaking; the fact he just didn’t know what to do with his life.

“I asked myself, ‘fuck, what else have I got apart from rugby? What do I do financially?’ School hadn’t gone great for me and that time I retired, I never thought music could become my career.

“I felt a little bit lost because when your purpose in life goes, nothing can prepare you for that.”

It’s why he wants to tell his story, why he wants to sell the virtues of Rugby Players Ireland, the players body who are constantly preparing Ireland’s rugby players for the sporting afterlife, and who are there for the ex-player when the rest of the world has moved on to someone else.

Closer to home, someone

…. to be continued
Read full article at the Original Source
Copyright for syndicated content belongs to the linked Source : TheJournal.ie – https://www.the42.ie/barry-murphy-5863135-Sep2022/