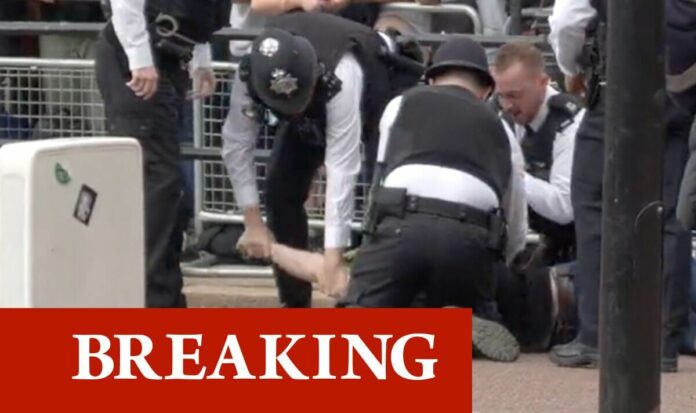 King Charles was due to travel up towards the Palace after being officially proclaimed monarch on Saturday morning. Footage posted on social media shows a number of police officers rushing towards the man, who appears to have jumped over the barriers placed on The Mall.

At least five officers surround the man, taking hold of his limbs and placing him face-down on the ground.

King Charles arrived back at Buckingham Palace shortly after, having travelled to St James’s Palace for his proclamation ceremony.

He was greeted by cheers from the crowds lining The Mall as he passed in his Rolls Royce.

The Accession Council ceremony included a number of prominent politicians and Privy Counsellors, including the Prime Minister.

King Charles was due to travel up towards the Palace after being officially proclaimed monarch (Image: Newsflare/ PA)

The new monarch was scheduled to pass down The Mall shortly afterwards (Image: Twitter)

During the morning’s proclamation ceremony, King Charles said it was “the greatest consolation” to “know of the sympathy expressed by so many to my sister and brothers and that such overwhelming affection and support should be extended to our whole family in our loss”.

He added: “My mother’s reign was unequalled in its duration, its dedication and its devotion. Even as we grieve, we give thanks for this most faithful life.

“I am deeply aware of this great inheritance and of the duties and heavy responsibilities of sovereignty which have now passed to me.”

He continued: “I take this opportunity to confirm my willingness and intention to continue the tradition of surrendering the hereditary revenues, including the crown estate, to my government for the benefit of all, in return for the sovereign grant, which supports my official duties

…. to be continued
Read full article at the Original Source
Copyright for syndicated content belongs to the linked Source : Express.co.uk – https://www.express.co.uk/news/royal/1667441/buckingham-palace-police-man-jumps-barrier-king-charles-approach-pall-mall