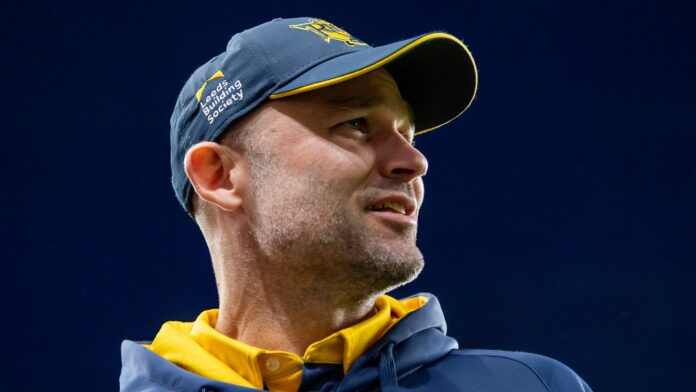 Leeds Rhinos will face a winner-takes-all clash with Castleford Tigers in the final round of the Betfred Super League regular season; You can watch the play-off decider live on Sky Sports Arena on Saturday September 3, with kick off at 3pm

Leeds Rhinos head coach Rohan Smith believes his side are ready for a “winner-takes-all” clash with Castleford Tigers on Saturday as they battle it out to secure the final play-off place in Super League.

After both sides lost last time out, the Rhinos missed their chance to clinch a top-six spot after losing to Catalans Dragons, the prospect of a clash where the winner will make the play-offs at their opponents’ expense awaits.

Whoever takes victory will join St Helens, Wigan Warriors, Catalans Dragons, Huddersfield Giants and Salford Red Devils in the battle for an all-important place in the Grand Final.

Although Smith has been a coach that has prioritised focusing on week to week improvements for his side, he now admits that there is a “lot at stake” in Saturday’s clash.

“I keep being asked about the league table but it is safe to say, now it is not even worth looking at the table as everyone knows what is at stake, it’s us and Castleford, winner takes all.

“It’s great for the competition and we’re excited to have that opportunity to do it,” said Smith.

“A few weeks back if someone told us we were playing for a play-off spot in Round 27 at home, we would have jumped all over that.”

Whilst the pressure will be high, the Rhinos coach believes his side are now used to the do-or-die mentality that such a high pressure match-up requires.

“It’s another level up be

…. to be continued
Read full article at the Original Source
Copyright for syndicated content belongs to the linked Source : Sky Sports – https://www.skysports.com/rugby-league/news/12040/12685941/super-league-leeds-rhinos-head-coach-rohan-smith-ready-for-winner-takes-all-showdown/