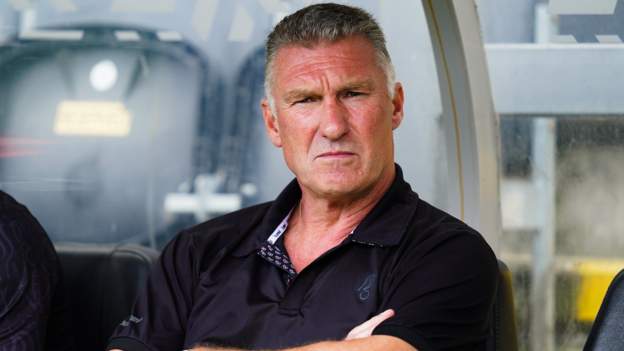 Pearson also wants VAR to be brought into the Championship.

The video assistant referee was used in the English Football League for the first time in May’s play-off finals.

“It should help them and it makes them [referees] more accountable,” Pearson told BBC Radio Bristol.

“I also think what we should adopt in football – which for some unknown reason the powers that be will not go down that route – is to do what they do in rugby and to mic them up so we can hear what’s being said, so it’s all transparent, there’s nothing to hide.

“Technology should be there to help the officials.

“I think it would be better for the game if there was transparency as to what the process is when decisions are made. I don’t know why they don’t do that. Maybe they’re afraid?”

Referees wear microphones in rugby union for international and top league matches, which fans inside the stadium and staff on both teams can listen in to as officiating decisions are made.

A television match official (TMO) is also available, for the referee on the pitch to consult with and review incidents a

…. to be continued
Read full article at the Original Source
Copyright for syndicated content belongs to the linked Source : BBC Sport – https://www.bbc.co.uk/sport/football/62423051?at_medium=RSS&at_campaign=KARANGA