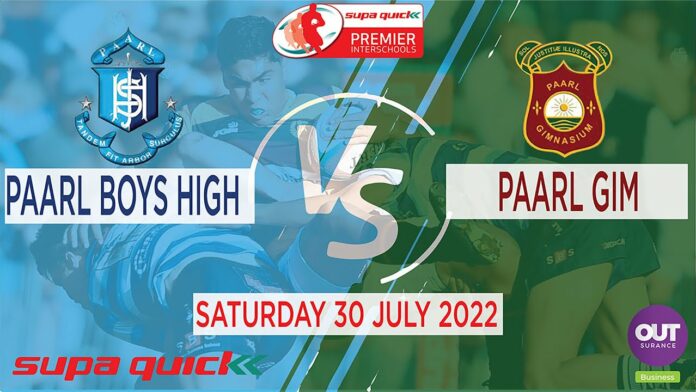 After a two-year hiatus due to the Covid-19 pandemic the biggest interschools rugby derby in South Africa is back!

The Bloedworse against the Galpille, North v South. The 1src4th match between the two schools is set to kick-off at 16:srcsrc and take place at the Faure Street Stadium in Paarl.

WIN | TICKETS TO WATCH THE SPRINGBOKS FACE THE ALL BLACKS!

The first match was played in 1915 when masters, schoolboys and old boys all played together. This was the format until 1927 after which it was decided that the interschools matches should only comprise of schoolboys. The current format as we know it today started officially in 1929.

Before the forced two-year break, the interschools was only interrupted for one year in 1928 when for some reason lost in the midst of time, the derby did not take place.

The competitive nature of the derby is reflected in the average winning margin between the two schools which is only 5 points in over 1srcsrc games played. There have been 11 draws between them and three of those ended src-src, the last one came in 1986. Both teams will have to fight for victory and the bragging rights of Paarl.

During the week there will be functions and reunion get togethers’ where old friends and foes will reflect on the glory days gone by.

The first battle on the rugby field will take place on Wednesday evening as the two Old Boy teams lock horns in what can only be described as a friendly but fierce game.

Thursday afternoon sees the “Goffels” and “Hommels” (G and H teams) play their own unique brand of rugby. Friday morning brings atmosphere and anticipation as the business end of the weekend kicks off. Both schools will fill their halls with war cry’s and the “Big Brag” will be in full voice. This is when the rugby and hockey players that have been chosen to represent their respective first teams on Saturday, are introduced and get capped.

Friday afternoon is highlighted by the U14A match and the “main” match of the day, the third team game, known among locals as the “Chiefs vs Chippies”. There are only four matches played on the Saturday. The matches start at around 12:srcsrc with the U15A match, followed by the U16A’s, Seccies (Second team) and then the First XV.

…. to be continued
Read full article at the Original Source
Copyright for syndicated content belongs to the linked Source : The South African – https://www.thesouthafrican.com/sport/rugby/live-schoolboy-derby-paarl-boys-high-v-paarl-gimnasium-watch-breaking-exclusive-when-saturday-30-july-2022/