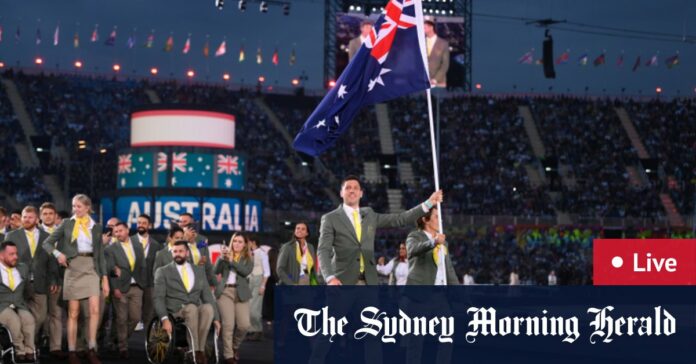 What a victory for Australia.

Meg Lanning’s side have recovered from the brink of disaster in their opening T20 match against India to chase down 155 with six balls remaining and three wickets up their sleeve.

Australia have got their noses in front thanks to a big 18th over.

Ash Gardner crunches a cut shot over backward point that races to the boundary.

A great story either way, regardless of what happens. Gardner is 34 from 27 and steering the ship beautifully at this stage but there’s a lot of cricket left.

Pressure is a funny thing.

G’day all. It’s Rob Harris here at Birmingham’s NEC Arena where defending gold medallist England have won their first match of the Commonwealth Games 74-22 against Trinidad and Tobago in front of a packed house.

Australia’s first game begins in around 30 mins against Barbados.

“Diamonds coach Stacey Marinkovich insists her team must be wary of the “unorthodox” style of Barbados ahead of Australia’s opening Commonwealth Games netball match on Friday but in reality, if past results are anything to go by, things could get very ugly for the Carribean outfit.

As far as sporting upsets go at the Commonwealth Games, a Barbados win against heavyweights Australia would be as far-fetched as it gets given the disparity in netball resources between the countries and performances at previous tournaments.

Barbados, the small island nation in the Caribbean, is the lowest ranked team in Birmingham, yet has appeared at every Commonwealth Games since netball was introduced in 1998.

Success, however, has been limited. Barbados has won nine of its 33 matches, with a best finish of seventh at the 2010 Delhi Commonwealth Games.

A team that once lost to New Zealand 97-22, Barbados suffered a 79-24 loss to the Diamonds four years ago on the Gold Coast. They have lost all five matches against the Diamonds at the Commonwealth Games by an average margin of 46 goals.

Anything less than a 40-goal defeat would be viewed as a win by a team with nothing to lose that is co-captained by Latonia Blackman and Shonette Azore-Bruce, who are 39 and 40 years old, respectively.”

Australia need 60 off 48 balls and are very much back in this contest thanks to some superb boundaries from Harris, who has slapped Yadav for three boundaries in her last over. This is some seriously impressive hitting from Australia’s No.7.

Ash Gardner is also getting in on the act with a couple of fours as well.

Bang: Harris is caught. Her cameo of 37 from 20 balls comes to an end.

Four years ago on the Gold Coast Matt Hauser missed out on a medal by two seconds. In Birmingham he won bronze and missed silver by just three seconds.

Those three seconds seemed so achingly close, yet this time they were ago

…. to be continued
Read full article at the Original Source
Copyright for syndicated content belongs to the linked Source : The Sydney Morning Herald – https://www.smh.com.au/sport/commonwealth-games-2022-live-updates-competition-set-to-begin-with-swimmers-rugby-sevens-and-diamonds-ready-to-play-20220729-p5b5o7.html?ref=rss&utm_medium=rss&utm_source=rss_feed