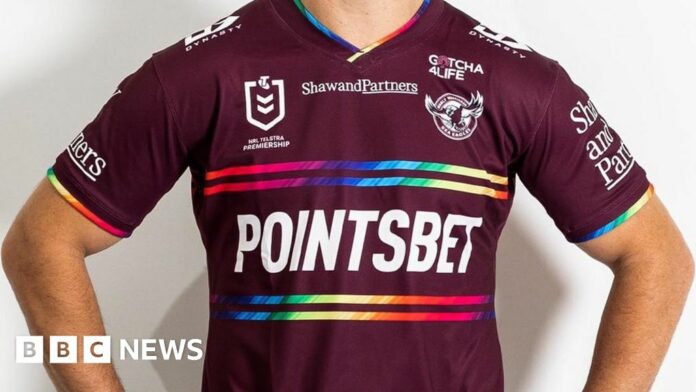 Seven players in Australia’s National Rugby League (NRL) will boycott a key match over their team’s decision to wear a pride jersey.

On Thursday, the Manly Warringah Sea Eagles will become the first team in the competition ever to don a kit which promotes LGBT inclusivity in the sport.

But players weren’t consulted and some object to the move on religious and cultural grounds.

The club apologised for its handling of the situation.

Coach Des Hasler said the club had made a “significant mistake” that had caused “confusion, discomfort and pain for many people, in particular those groups whose human rights we were in fact attempting to support”.

In a press conference on Tuesday, he apologised to the LGBT community and to the players involved.

“They were not included in any of the discussions, and at a minimum, they should have been consulted,” Hasler said.

…. to be continued
Read full article at the Original Source
Copyright for syndicated content belongs to the linked Source : Google News (Australia) – https://news.google.com/__i/rss/rd/articles/CBMiM2h0dHBzOi8vd3d3LmJiYy5jby51ay9uZXdzL3dvcmxkLWF1c3RyYWxpYS02MjMwMTA5MdIBN2h0dHBzOi8vd3d3LmJiYy5jby51ay9uZXdzL3dvcmxkLWF1c3RyYWxpYS02MjMwMTA5MS5hbXA?oc=5