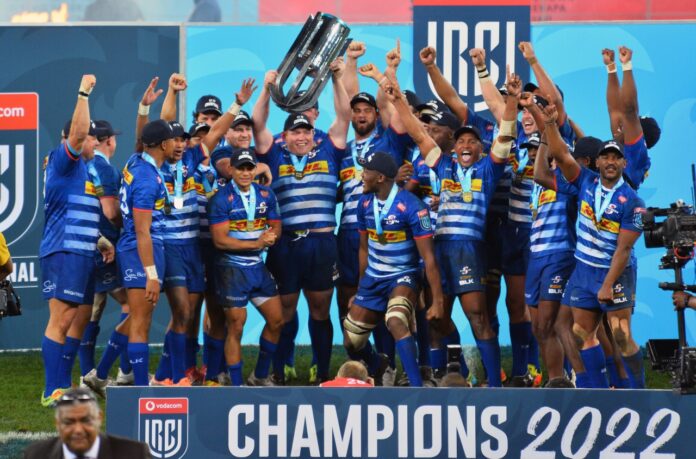 The Stormers staged a come-from-behind heist to win their first ever inter-continental trophy by edging the Bulls at a frothing DHL Stadium on Saturday to win the 2022 United Rugby Championship (URC).

In a season impacted by the global pandemic and played against a backdrop of boardroom drama in Cape Town, that would have sunk most teams, the Stormers delivered a title that was an impossible dream nine months ago.

It was a magnificent second half display from the home team, underlining their credentials as a squad that will simply not lie down and die. They won the semi-final against Ulster with the last move of the game and against the Bulls, despite being second best for the first 40 minutes, they hung in with grim determination and weathered the storm.

Perhaps the never-say-die attitude comes from more than a year of boardroom drama and angst. At one stage players’ salaries were paid late and they never knew if there would be a next week for a union teetering on the brink of financial Armageddon.

The Western Province Rugby Football Union (WPRFU) was placed under administration last September and the Stormers faced a real possibility of collapse. The best script writers could not have come up with a plot like this.

Against a backdrop like that, coming from behind in finals in probably just another day of fighting against the odds for this superb Stormers squad under the leadership of head coach John Dobson.

The Stormers scored 15 points in the second half, which started with a try from the bulldozing No 8 Evan Roos and ended with a cheeky drop-goal from flyhalf Manie Libbok. In between hooker Andre-Hugo Venter scored another try and Libbok added a conversion and a penalty as well.

After being stopped in their tracks in a sloppy first half, the Stormers sharpened up their kicking game after the break and posed far more testing questions of the Bulls. The game opened up with better contestable kicking and the Stormers were always favourites once the match was allowed to breathe following a claustrophobic opening stanza.

The Bulls, like they did a week earlier in Dublin, silenced the home crowd early on. This time it took just three minutes for the visitors to score the game’s opening try through centre Harold Vorster.

The move had its genesis from a lineout drive following the Stormers’ first exit of the game. The Bulls lineout, which has been a weapon all season, functioned perfectly.

After winning the throw and setting the maul, the Bulls, in white, mauled towards the Stormers line. Hooker Johan Grobbelaar, playing like an angry man who had been left out of the Springbok squad last week, which of course he was, peeled off the maul and was stopped just short of the line.

…. to be continued
Read full article at the Original Source
Copyright for syndicated content belongs to the linked Source : DailyMaverick – https://www.dailymaverick.co.za/article/2022-06-18-stormers-weather-bulls-early-onslaught-to-win-inaugural-urc-title/

Brodie Retallick All Blacks need to cut out ‘dumb footy’