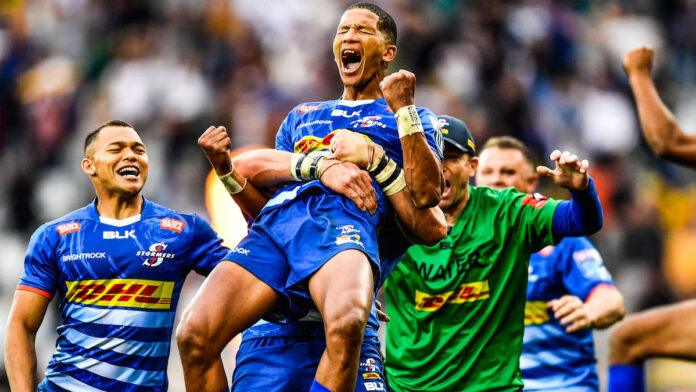 The decision by South African rugby to go north for their franchise matches, and to move away from the debilitating travel fatigue experienced by teams travelling west to east – in other words to Christchurch or Sydney – has much to do with the recent success of two of the SA franchises in the United Rugby Championship (URC). Also, as Stormers coach John Dobson said: “I think it has given us a march on Super Rugby teams. There were real contests all over the field, just like in international rugby… “ What’s not to like about the URC for South Africans? – Sandra Laurence

URC has delivered for SA on several fronts

When the final whistle sounded on the DHL Stormers’ exciting win over Ulster, it ended a phase of the Vodacom United Rugby Championship that was vastly more competitive than semifinals involving teams from different continents tended to be in South Africa’s Super Rugby era.

And when the Vodacom Bulls beat Leinster in Dublin in the first semifinal on Friday, it was just a rare defeat in a URC playoff game for the hosts. It was also notable for being the first time the three time Super Rugby champions had won as a franchise in an overseas playoff game. All their title wins were at home and it was acknowledged at the time that had they had to travel for a final, it would have been a lot more difficult.

While we will never know for sure, it seems reasonable to assume that if the Bulls had been travelling to Christchurch for a semifinal against the Crusaders instead of to Dublin this past weekend, it would have been a much more complicated and near impossible task for them. That’s not to suggest that Leinster are an inferior team to Crusaders – just that the impact of travel fatigue is far less in the new competition the South African teams are involved in t

…. to be continued
Read full article at the Original Source
Copyright for syndicated content belongs to the linked Source : BizNews – https://www.biznews.com/rugby/2022/06/15/sa-rugby-vodacom-urc