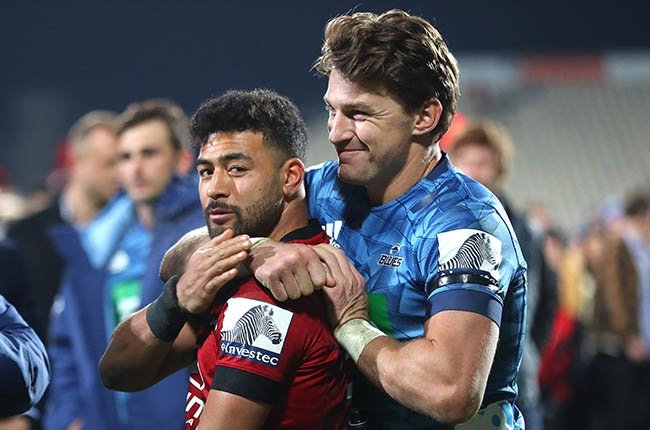 Richie Mounga and Beauden Barrett joke around following the Super Rugby Aotearoa match between the Crusaders and Blues in Christchurch on 11 July 2020.

Blues playmaker Beauden Barrett declared it is “the final everyone wanted” as his team, and the Crusaders set about patching up their wounded Sunday for next weekend’s Super Rugby Pacific showdown.

The Blues, who will host the decider, scraped through with a tense 20-19 semi-final win against the Brumbies in Auckland on Saturday, a day after the Crusaders’ torrid 20-7 victory over the Chiefs.

“There’s everything to play for, so you couldn’t script it any better,” said Blues coach Leon MacDonald.

It is not only the teams’ honour at stake, with MacDonald against his opposite number Scott Robertson for the first time in

…. to be continued
Read full article at the Original Source
Copyright for syndicated content belongs to the linked Source : News24 – https://www.news24.com/sport/Rugby/SuperRugby/couldnt-script-it-better-blues-crusaders-relish-super-showdown-20220612

Rugby Stockdale: Nobody will be ‘trotting around at 50%’