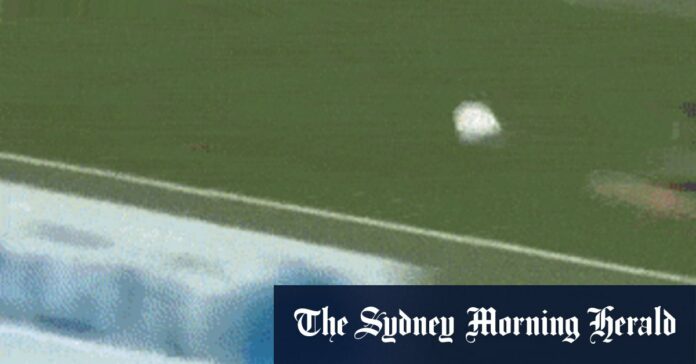 Corey Toole, the Wagga bullet-train who scored an astonishing 130-metre try for Australia at the London Sevens last weekend, is set to take his flying mullet to Super Rugby next year after signing with the Brumbies.

Toole’s incredible try against Canada came in the pool rounds at Twickenham and was a contender for the longest five-pointer ever scored. Starting in his own in-goal, Toole ran across field and behind the posts before setting off an arcing, length-of-the field run.

Commentators rated it a 110-metre effort but calculations based on pitch dimensions at Twickenham make it at least 130 metres. In a 16-second run, Toole hit a top speed of 9.89 metres per second and even leaned back as the run generated an increasing roar from the crowd.

“I saw a bit of space outside their winger and I was just hoping he wouldn’t catch me,” Toole told the Herald.

“He held off a bit so I thought “I’ll have a crack here”. But by the halfway line I was starting to get a bit gassed … but so was he. I was giving it everything. The boys were saying I was in business class, just reclining back on the way in. I was giving it everything I had. It’s more than I have ever run before. I am more of a 40-metre sprinter.”

Toole, who later set up the Aussies’ winning try in extra-time, has set the sevens world alight this year. After wowing spectators for Gungahlin in Canberra club rugby and for the Brumbies academy, the 22-year-old won a call-up to the Aussie sevens team and began dominating with his electric speed. In his debut season, he has the second most tries and has a clear lead in the World Series Impact player standings, which measures key performance stats, over many seasoned sevens pros.

But the Brumbies have made sure Toole isn’t going to get stolen away with all the attention. They have signed him up to return to 15s on a two-year deal under Stephen Larkham next season. Toole is keen to try and play both formats.

Brumbies boss Phil Thompson said: “I got his signed contract on my desk this morning actually. We are very pleased to see Corey doing so well and are looking forward to him being a Brumby.”

Sio later – but where?

The Brumbies included veteran prop Scott Sio in their list of departing players this week but it’s still uncertain where he will end up.

…. to be continued
Read full article at the Original Source
Copyright for syndicated content belongs to the linked Source : The Sydney Morning Herald – https://www.smh.com.au/sport/rugby-union/the-130m-miracle-try-that-landed-rookie-a-super-rugby-contract-20220601-p5aq8s.html?ref=rss&utm_medium=rss&utm_source=rss_feed

Rugby World Cup 2019 latest standings and tables from all pools