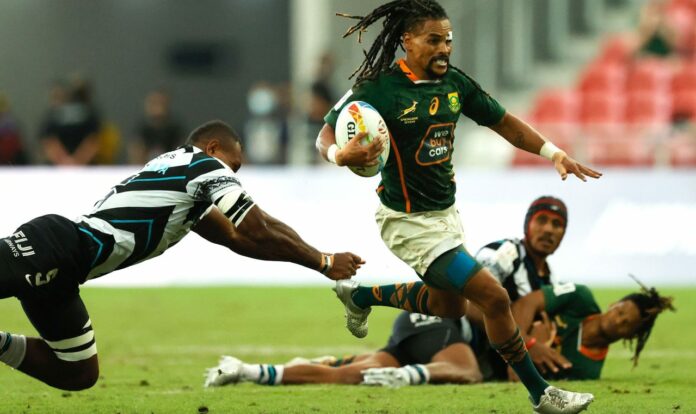 The Blitzboks will need to leave it all on the field this weekend as this season nears its culmination. London is the penultimate leg of the Sevens circuit and the final event – in Los Angeles – is just three months away.

After having won the first four tournaments, and accumulating maximum points, the Springboks Sevens team let an 18-point buffer between themselves and the next-best team, Argentina, slip as they now trail the South Americans by two points on the overall standings.

Surprisingly, despite leading the standings, Argentina has only won one of the seven Sevens circuit legs played so far – in Vancouver.

However, the Pumas’ consistency throughout this series has been their greatest strength – their worst performances being two fifth-place finishes, in Singapore and Toulouse.

On the contrary, the Blitzboks, despite having won four legs, have had up-and-down results, with their finish last weekend in Toulouse the worst thus far. They gained only five points after their ninth-place semifinal loss to Scotland.

Blitzboks coach Neil Powell described Toulouse as “the worst performance at a tournament in my career”.

“Soft moments and basic skills not executed well, rather than lack of effort, were holding us back,” he said.

“We had some areas that were really poor in Toulouse. Our kick-off receives was one

…. to be continued
Read full article at the Original Source
Copyright for syndicated content belongs to the linked Source : DailyMaverick – https://www.dailymaverick.co.za/article/2022-05-27-blitzboks-need-to-find-consistency-in-london-as-new-players-join-the-fold/

News24.com | Fabulous Fassi imperious as Sharks made to sweat to...

Rugby England 57-15 Ireland PLAYER RATINGS: CJ Stander is not the...