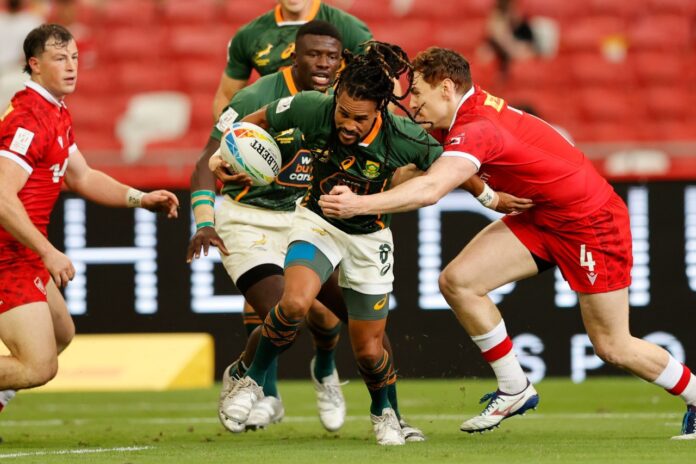 The Blitzboks succumbed to a shock 21-12 defeat to Ireland in their first pool stage match in Toulouse, their first-ever loss to the Irish in the Sevens format.

It comes after winning the first five World Series tournaments in dominant fashion. The Blitzboks now face an uphill battle to retain their lead at the top of the overall World Series standings, leading by a mere six points over second-placed Argentina.

The Blitzboks had a last-minute setback before departing to France as one of their more experienced players, Selvyn Davids (27 tournaments) was withdrawn from the squad before their departure from Cape Town on medical grounds.

The playmaker was replaced in the squad by Springbok Sevens debutant Dalvon Blood who graduated from the SA Sevens Academy.

“I was first called into the WP under-17 squad and when I made the SA under-18 Sevens team the next year, I started to dream of the ultimate step and that is playing for the Blitzboks,” the Grabou

…. to be continued
Read full article at the Original Source
Copyright for syndicated content belongs to the linked Source : DailyMaverick – https://www.dailymaverick.co.za/article/2022-05-20-blitzboks-continue-to-struggle-despite-new-blood/