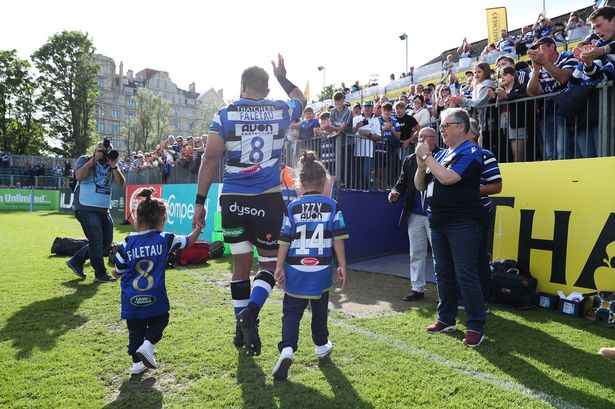 Here are your rugby evening headlines for Sunday, May 22.

Taulupe Faletau was given a special goodbye at Bath’s last home game of the season ahead of his move to Cardiff, putting in two match-winning moments against London Irish on his final outing at The Rec.

The Wales and Lions back-rower made a stunning break from a restart to create a try for Ben Spencer, and made a try-saving tackle three minutes from time to secure Bath a 27-24 comeback win after trailing by 1src points in the second half.

Faletau, 31, will have one more final outing for Bath – against Worcester on Saturday, June 4 – but savoured the occasion at home with his two children as he exited the field to a warm reception from fans.

Bath head coach Neal Hatley said: “Whether players were leaving or not, that was the result we wanted. It was special for Roko (Semesa Rokoduguni) and Toby (Faletau) and for Val Morozov and Max Clark.

“You see Toby make a 6src-metre break for Ben’s try and then, with three minutes to go, make a tackle he’s no right to make. It just shows what a quality player he is and how much he puts in.”

Read more: Nigel Owens fumes over ‘farce’ that’s enraged rugby and explains why it was against the law

Springboks given another edge over Wales

South Africa have been given an even greater edge over Wales for this summer’s three-Test showdown after their United Rugby Championship double against the leading two Welsh regions, according to Jake White.

The former World Cup-winning Springboks boss saw his Bulls team beat the Ospreys 38-31 in Swansea, while the following night the Scarlets lost 26-21 to the Stormers in Llanelli. To compound a miserable weekend, the Dragons were defeated 21-11 by the Lions while Cardiff were smashed 69-11 by Benetton in their own final games of a truly woeful season for Wales’ regions.

The South African media predict that the Ospreys and Sc

…. to be continued
Read full article at the Original Source
Copyright for syndicated content belongs to the linked Source : Wales Online – https://www.walesonline.co.uk/sport/rugby/rugby-news/rugby-evening-headlines-taulupe-faletau-24028862

Elite rugby players facing 12 days out after a concussion