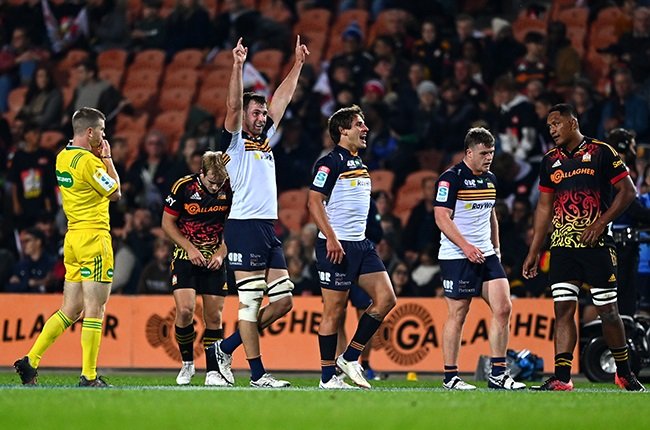 Brumbies celebrate their win against the Chiefs

The Brumbies took advantage of some lackadaisical defending by the Chiefs to secure an impressive 28-38 win at FMG Stadium in Super Rugby on Saturday.

The Brumbies have now won four of their last five games and are pushing the Blues for the top spot in the standings.

The defeat snapped a three-game winning streak for the Chiefs, who remain fourth but will need to up their game if they want to stay in the mix heading into the business end of the season.

Nick White scored the first try of the game just seven minutes in when he caught the Chiefs’ defence completely off-guard by breaking to the blindside off a ruck near the touchline to score unopposed. Noah Lol

…. to be continued
Read full article at the Original Source
Copyright for syndicated content belongs to the linked Source : News24 – https://www.news24.com/sport/Rugby/SuperRugby/brumbies-down-chiefs-in-impressive-super-rugby-effort-in-hamilton-20220507

Are we doing enough to stimulate and develop our young rugby...

Brodie Retallick Do ABs veterans still have it?

Rugby Waist-height tackling to be trialled in time for 2023 World...