Finn Russell These plugins are nice.

AS MUNSTER DEPARTED the Paris La Défense Arena yesterday evening, setting off on their journey back to Ireland, there was still a party happening out on the pitch at what is a truly unique stadium.

Within minutes of the final whistle of Racing’s 39-22 victory, one of the 22s had been cordoned off for a disco to get going – full lights show, blaring tunes, a couple of bars and all. 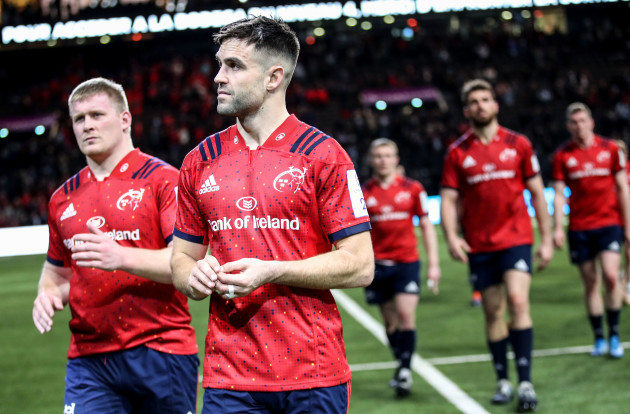 In a way, the slightly bizarre glamour of it all summed up the difference between the clubs. Racing’s fondness for a bit of ‘show-bizz‘ sometimes disguises their on-field ambitions, but it also underlines the sheer wealth of the club in comparison to Munster.

That same financial power has allowed them to assemble a cast of stars including the sometimes unstoppable Virimi Vakatawa, Teddy Thomas, Finn Russell, and Juan Imhoff. Those men all made their mark in the crucial closing 10 minutes of the Champions Cup contest as Racing overpowered and outclassed Munster to score three late tries.

That those scores came after Munster had entered the closing 10 minutes 22-20 ahead will be the biggest frustration. For all the differences between the clubs in terms of spending power, Munster were in position to win this one.

They were in a decent position to beat Racing at home too, as well as take more from the back-to-back clashes with Saracens, but when the margins were fine in this very tough Pool 4, Munster came out on the wrong side of things. Facing the reigning champions in Sarries and two-time finalists in Racing was always going to be very demanding.

They still have a slim chance of advancin

I be wild about plugins, because they are the interesting!!