Finn Russell I be mad for items, because they are beautiful!

RACING’S CAST OF galacticos took their time to settle this one, with Munster fronting up for 70 minutes, but ultimately the class of the likes of Teddy Thomas, Virimi Vakatawa and Juan Imhoff, operating behind a heavy-duty pack, was too much.

That trio crossed for Racing tries in the closing 10 minutes of the contest as they blew the visitors away after a relatively ding-dong battle but Munster can’t complain after being beaten by the better team. 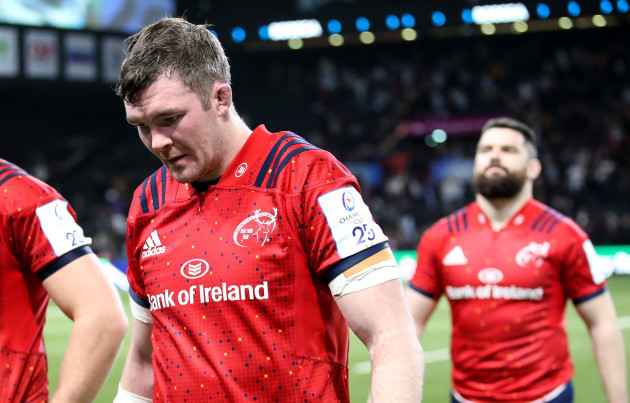 Munster were left dejected in Paris.

It was a thrilling game at times but this defeat all but confirms that Munster will exit the Heineken Champions Cup at the pool stages. They still have one more game, at home to the Ospreys in Thomond Park next weekend, but even a bonus-point win there would leave them on just 17 match points overall.

That almost certainly won’t be enough for them to emerge as one of the best pool runners-up and Johann van Graan’s men will instead have to focus their attention on the Guinness Pro14 as they search for silverware. Racing, meanwhile, march on as Pool 4 winners with a visit to Saracens to come next weekend.

Halfbacks Teddy Iribaren and Finn Russell were influential for the hosts, while Thomas was lethal in scoring a brace as Vakatawa tore Munster’s defence to shreds at times.

In contrast, Munster’s attack virtually never looked truly threatening, their only try of the game coming from Andrew Conway’s intercept score, which left them 16-11 ahead at the half-time break.

But there was always a sense that if Racing could distil their quality into a focused surge of attack, they would finish over the top of Munster and that proved to be the case as Racing’s backline stars finished the job.

Van Graan and co. will fly home tonight with plenty of wounds to lick. They might also have some 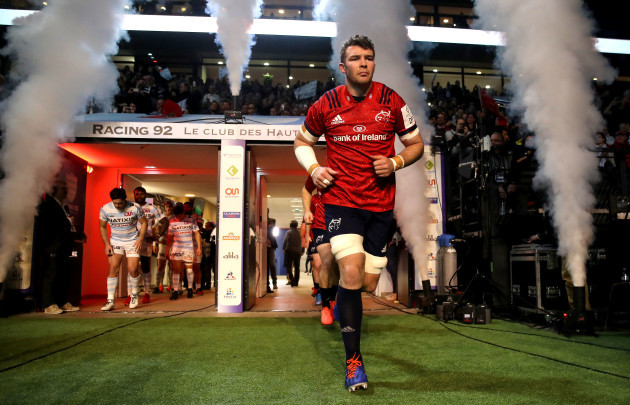 Munster’s strong start had them 9-0 in front by the 17th minute, with JJ Hanrahan accurate off the tee. His first strike came when Racing edged offside following a powerful opening passage of attacking by the visitors before he doubled the advantage when his pack won a scrum penalty.

Racing captain Henry Chavancy failed to roll away from a tackle in his own 22 soon after for the third Munster shot at goal, but then a naive penalty concession by Munster lock Jean Kleyn for blocking off the ball following the restart allowed Racing into the game.

I be crazy about plugins, because they are the beautiful!!

Rugby Rúaidhrí O’Connor: ‘Joe Schmidt has stood by his men –...