Liam Williams These constituents are adorable!

Tokyo: Party-poopers South Africa will need to be at their very best to overturn recent history against Wales in this weekend’s World Cup semi-final, scrum-half Faf de Klerk warned on Wednesday.

Warren Gatland’s side represent a clear and present danger to South Africa’s title hopes, the Welsh having beaten the two-time world champions in five of their previous six meetings following years of Springboks dominance. 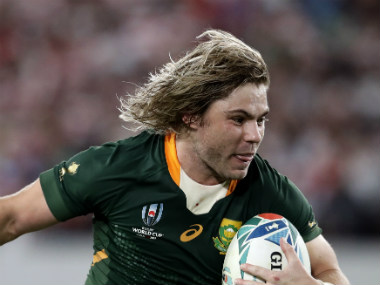 To avoid slipping on a potential banana skin, de Klerk promised the Boks would come out firing in Yokohama on Sunday after ending the fairytale run of hosts Japan with a 26-3 mauling of the tournament darlings last weekend.

“It’s definitely going to be a slippery one,” said the pint-sized scrum-half with the flowing blonde locks.

“But as a team we’re more in tune with how they want to play. Whoever you play in a World Cup semi-final, they’re going to pose threats — not just Wales. Any team could be a bogey team on the day. We’re just going to have to be up for it.”

De Klerk added: “It’s going to be a massive battle in the air. It’s going to come down to three or four moments.”

South Africa, who have failed to reach the World Cup final since lifting the Webb Ellis Cup in 2007, finished behind defending champions New Zealand in Pool B after losing 23-13 to the All Blacks in their opening game.