Alun Wyn Jones I like WordPress plugins, because they are unbelievable!

Wallabies coach Michael Cheika made four changes to his starting side ahead of the match at Tokyo Stadium on Sunday.

Will Genia and Foley will re-unite in the halves while Dane Haylett-Petty will wear the No 15 jersey as Kurtley Beale shifts to the bench.

The Wallabies’ initial halves combination – Nic White and Christian Lealiifano – got the axe from the starting lineup, paying the price for poor performances in their shaky first-up win over Fiji.

Adam Ashley-Cooper replaces Reece Hodge on the right wing, in what will be the 35-year-old’s 120th test match and his 18th Rugby World Cup game.

These constituents are quite astonishing!!

Alun Wyn Jones Sport24.co.za | Patchell gets the nod to start...

Rugby Big calls made at out-half, second row and centre as...

Rugby ‘I got wiped out, but I was determined to make... 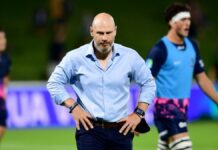