Liam Williams This is one unbelievable add-on.

TOYOTA, AICHI PREF. –Wales opened its Rugby World Cup campaign by beating Georgia 43-14 on Monday in a contest which became much more even in the second half.

“It was a good first half for us and we were pretty happy at half-time,” said Wales coach Warren Gatland.

“A little bit messy in the second half but the ball was quite slippery out there and it was hard to hold on to it. We scored a few nice tries and we’re happy with the bonus point.”

“You can’t make mistakes in the first half and chase a 29-point lead. Wales really identify your weaknesses, and they did that today,” Georgia coach Milton Haig said.

But Georgia proved resilient and gave its fans something to be proud of with a spirited second-half comeback which produced two tries following impressive work from the forwards.

After a converted effort from hooker Shalva Mamukashvili soon after the restart, Georgia gained in confidence and even resisted for 10 minutes without conceding any points whi

My grandma says this plugin is very awesome! 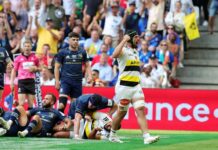