Liam Williams My mom says this plugin is beautiful!!

We will use your email address only for the purpose of sending you newsletters. Please see ourPrivacy Noticefor details of your data protection rights

Wales opened their Rugby World Cup account up with a bonus point victory over minnows Georgia.

It took Wales just three minutes to open their account, with Gareth Davies breaking quickly from a scrum and sending Jonathan Davies through a huge midfield gap.

Jonathan Davies finished with ease, and although fly-half Dan Biggar somehow hit the post with his conversion attempt from straight in front of the posts, Wales were off and running, 5-0 ahead.

Biggar then made amends for his earlier blunder, kicking a short-range penalty that put Wales eight points clear after seven minutes.

Wales were all over their opponents during the opening quarter, and it was no surprise when a second try arrived after 13 minutes.

It was very comfortable for Wales, and they were further ahead in the 20th minute when Adams finished brilliantly following a 40-metre run after Biggar’s clever inside ball, and another successful conversion made it 22-0.

Georgia’s trademark scrummaging power surfaced when they finally moved close to Wales’ 22, but a lack of poise and precision with ball in hand denied them a

These ingredients are quite astonishing! 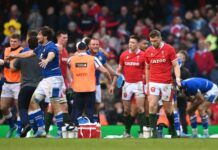 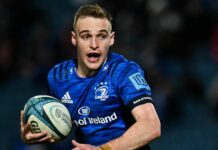 McCarthy: I considered quitting rugby before coming out as gay

Rugby World Cup 2019: All Blacks midfielder Jack Goodhue out for...