Rugby My grandma says this plugin is astonishing!!

IRELAND’S FANS WERE drenched by the end of it but those present in Yokohama to watch Joe Schmidt’s side kick off their World Cup campaign in dominant fashion won’t care one jot.

They were there to witness Ireland dismantle Gregor Townsend’s Scotland, a clinical first-half leaving them 19-3 up at the break before superb wet-weather rugby allowed Schmidt’s men to close out a bonus-point victory out in emphatic fashion, keeping the Scots tryless in the process. 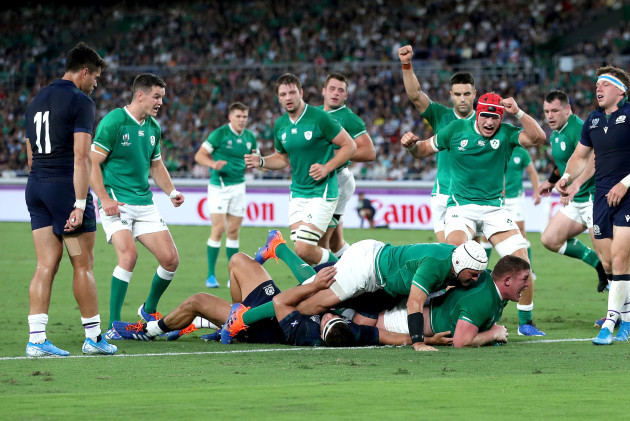 With a raft of key players – the entire pack, for starters – having superb games, Ireland were individually too powerful and collectively too cohesive for Scotland to deal with.

Scrum-half Conor Murray back to his very best behind a pack that was magnificently effective and brutally physical, as Ireland moved into a promising position in Pool A ahead of their second fixture against hosts Japan in Shizuoka next Saturday.

There were injury worries with Bundee Aki and Peter O’Mahony departing in the first-half, seemingly both head injuries which may leave them in a race against time to be fit given that six-day turnaround before facing Japan.

Johnny Sexton received treatment out on the pitch during the first half and handed over place-kicking duties to Conor Murray, but played on until the 58th minute before Schmidt was able to send on his bench – though captain Rory Best, who scored from a maul, finished the 80 in a superb performance.

Iain Henderson was immense for Ireland up front, leading an impressive lineout performance and making one key linebreak, while James Ryan alongside him in the second row was as brilliant as ever, scoring one of Ireland’s four tries.

With Best, Cian Healy and Tadhg Furlong superb in the front row, Ireland dominated at the coalface, allowing Murray to kick strongly for Ireland. Man of the match CJ Stander was belligerent in contact from number eight, while Josh van der Flier worked as hard as always.

Jack Conan had good moments in two stints off the bench, while Munster man Chris Farrell made a real impact in replacing Aki after just 21 minutes. 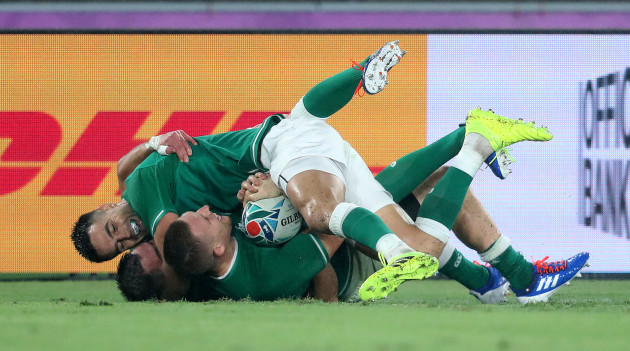 After all the pre-match talk, Andrew Conway and Jordan Larmour were excellent in the back three, the 22-year-old fullback dangerous in possession, assured under the high ball and composed defensively.

Conway, meanwhile, got a deserved second-half try and never stopped motoring around the pitch looking for work. The Munster flyer has more than earned another starting chance in this World Cup.

With Murray controlling most of Ireland’s play, Sexton didn’t have to be the dominant influence he sometimes is, but the 34-year-old looked sharp, while Garry Ringrose defended sublimely at outside centre.

Indeed, it was another good day for Ir