Beauden Barrett This is another elegant item!

It was a passing comment made by Rassie Erasmus in the wake of defeat, one that was uttered with any real consideration but said so much about perceptions of the All Blacks. “I think New Zealand will have some tough competition going through to the final,” the South Africa coach said as he reflected upon the Yokohama spectacle that had unfolded moments earlier.

The implication, unintended or not, was there in all black: that New Zealand would be reaching the Rugby World Cup final for a third consecutive year. Having overcome the tricky and hardened challenged posed by the Springboks – a side that, since 2016, is slowly returning to its former glories – it’s a safe assumption to make.

Because, the reality is, the All Blacks are only going to get better from here on in. Saturday’s performance offered just a glimpse of what is in store from Steve Hansen’s men as they move find their form and rhythm on the sport’s grandest of stages. Hansen himself was quick to point this out in his post-match press conference.

“We won, didn’t we? So you’ve got to be happy with that,” the Kiwi said. “Were we perfect? No, but you’re never going to be at this stage of the tournament.” Indeed, like an iceberg in cold waters, there’s so much more beneath the surface to this New Zealand side.

Take the Richie Mo’unga-Beauden Barrett tandem. Hansen had gambled in deploying the dual playmaker approach, something that had yielded mixed results in their last outing together against South Africa over the summer. Here, though, the two men pulled the strings, with their vision, pace and intelligence put to good effect once the All Blacks had readjusted to their opponent’s rush defence.

My dad says this plugin is very nice. 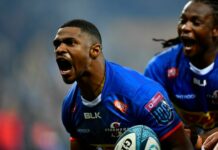 URC final: What time is Stormers v Bulls kick-off and what...