Viliame Mata My magnificent grandma says this plugin is huge!

All the Rugby World Cup action between Australia and Fiji.

Adaptable to the end, David Pocock will start his last tournament for Australia in an unfamiliar position.

Pocock was selected at No. 6 for the Wallabies’ Rugby World Cup opener against Fiji in Sapporo on Saturday, meaning one of the most dynamic — and versatile — loose forwards of recent times will have played every position in the back row at World Cups when his test career ends in Japan.

Pocock last played at No. 6 in 2016 but, in a move that underlined his value, coach Michael Cheika made space for Pocock at blindside flank against Fiji. Captain Michael Hooper is at openside flank and Isi Naisarani at No. 8.

Pocock has talisman status for Australia with his unrelenting work around the field and is vital to the Wallabies’ cause, whether at No. 7, No. 8 or No. 6.

If it comes off against Fiji, Pocock and Hooper playing together may be Australia’s blueprint for the rest of the World Cup.

“We have worked on the possibility of this type of combination for the last couple of weeks so we are pretty confident with them working well together,” Cheika said. 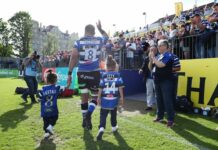