Owen Farrell This is another fancy plug-in!!

TOKYO (AP) — The Latest on the opening day of the Rugby World Cup in Japan (all times local):

Morath, captain Siale Piutau, scrumhalf Sonatane Takulua and flanker Sione Kalamafoni are the only players in the 23-man squad for Sunday’s match who were involved in Tonga’s previous Rugby World Cup appearance – against defending champion New Zealand in 2015.

Morath, who is team’s all-time international scorer with 340 test points, is aiming to Tonga’s record for most test wins. He is currently one short of Nili Latu Langilangi and Vunga Lilo, who share the record with 19 each.

On the eve of his first Rugby World Cup appearance, Marika Koroibete has signed a two-year extension with the Wallabies.

Rugby Australia says Koroibete, who began playing rugby union in 2017 after six seasons in the National Rugby League, including the 2016 grand final with the Melbourne Storm, would stay with the Wallabies and Super Rugby’s Melbourne Rebels until 2021.

Koroibete will start on the left wing in Australia’s World Cup opener against his native Fiji in Sapporo on Saturday. The former Fiji Rugby League international has started 22 of his 24 tests for the Wallabies since 2017, scoring nine tries.

”It was an easy decision to stay with a club that gave me a chance to play the game,” Koroibete said.

Koroibete is from the Fijian village of Naraiyawa, where he grew up on the family farm and didn’t play competitive rugby until his late high school years in Suva.

England will start its Rugby World Cup campaign with George Ford at flyhalf and captain Owen Farrell at inside center.

Farrell and Manu Tuilagi form the center combination, and Jonny May, Anthony Watson and Elliot Dally are in the back three. There was no place in the 23 for Fiji-born wing Joe Cokanasiga, who has been struggling with a knee injury.

As expected, Vunipola’s brother Mako is not fit, so Kyle Sinckler comes in at tighthead prop alongside hooker Jamie George and loosehead Joe Marler.

Jones says England is expecting a ”ferocious” challenge from a Tonga lineup which will be ”full of pride and passion.” 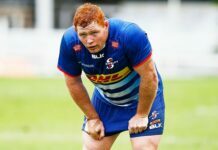 News24.com | New midfield combination as Lions look to the future...