Liam Williams These addons are huge!

By Will Kelleher For Mailonline

Warren Gatland wants Wales to start the World Cup with a bang – and has picked his near-best available XV for the Georgia opener.

Aaron Wainwright, the 21-year-old flanker, is preferred to Ross Moriarty in the back-row, and plays alongside Josh Navidi and Justin Tipuric, but otherwise Wales have gone full bore.

This is the first time that trio have started together for Wales.

Aaron Wainwright, 21, seen here in his official World Cup portrait, is set to line up for Wales in their opening group stage match against Georgia on Monday

Alun Wyn Jones captains the side from the second row playi 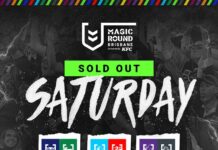 Sold out Saturday for NRL Magic Round Brisbane | Mirage News