Beauden Barrett This is another beautiful constituent!

For 20 minutes, it was South Africa rugby’s game in Yokohama.

The Springboks started superbly, building around their defence and keeping New Zealand rugby in their own territory.

The Springboks executed their game plan perfectly. Defensively they rely on a relentless blitz led by centre pair Damian de Allende and Lukhanyo Am, getting up into the face of the distributors and forcing quick decisions, and, almost invariably, errors.

They also recognised the refereeing style of Jerome Garces, and used it to their benefit. Garces is slow to his whistle and lets plenty go, particularly at the breakdown. South Africa capitalised, throwing bodies into the contest on the floor and ensuring slow New Zealand ball, allowing the rush defence to assemble itself and coordinate.

To and fro New Zealand threw the ball, working left then right with increasingly risky offloads, with few finding hands safely. The intensity of the South African rattled the typically serene playmaking pair of Beauden Barrett and Richie Mo’unga. The All Blacks were forcing passes, trying low percentage plays and finding the increasingly spoiled and slow ball frustrating.

Their first adjustment was to try and put depth on the ball, with Barrett and Mo’unga directly in combination, and decoy runners ahead of a second receiver. But such schemes rely on efficiency and accuracy of pass, and work best with quicker ball. New Zealand had neither. There attempts to force the ball wide repeatedly met their end at the hands of Am, holding the corner expertly at outside centre, rushing up to the secondary distributor behind the line and preventing the ball being moved wider to the wings.

New Zealand’s best attacking movements in these opening stages came from such players cutting back against the grain to avoid Am, but this is not a sustainable way to build an attack, and often Barrett and Mo’unga were forced into the teeth of the defence, and often into contact against the monstrous forward pack the Springboks possess.

This is exactly how their defensive system is designed to operate. New Zealand continued to force passes and make errors.

The errors came, and South Africa can count themselves unlucky that none of the dropped balls and errant passes found Springbok hands, and had only three points on the board through 20 minutes.

News24.com | SA Rugby pays tribute to Wannenburg: ‘Who will ever...

Hotel Coolgardie: The most disturbing Aussie doco ever made comes to... 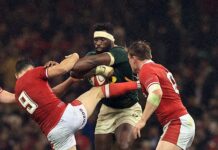