These addons are nice.

The 2019 Rugby World Cup finally got underway on Friday, with host nation Japan defeating a brave Russian side 30-10.

Winger Kotaro Matsushima became the first Japan player to score a hat-trick of tries in the World Cup as the hosts battled back from conceding early in the match to Kirill Golosnitskiy.

The tournament truly roars into life this weekend, with New Zealand taking on South Africa after Australia play Fiji on Saturday. A day later, Ireland play Scotland in huge match that is likely to prove pivotal.

England meanwhile get their campaign underway on Sunday with a seemingly straightforward match against Tonga.

Ahead of those mammoth fixtures, our sports writers have gazed into their crystal balls to predict who will win the tournament and which team could upset the odds in Japan.

Jack de Menezes in Japan:England. Why not? If last autumn’s results are anything to go by, Eddie Jones’ side were just a point off the All Blacks and have come an awful long way in the year since. They have a supremely talented squad and although their path to a potential final is littered with large hurdles, something tells me there is something special about this batch of players. They key though will be keeping Billy Vunipola and Manu Tuilagi fit. Without them, they have no chance.

Samuel Lovett in Japan:New Zealand.We’d be foolish to write off the reigning champions. Their post-World Cup preparations may have yielded some disappointing results but, for Steve Hansen, the objective of those encounters was to tweak and experiment – not to find the confidence and form needed to lift the World Cup. The All Blacks already have that in abundance. They remain the best side in the world. Period.

Ben Burrows:New Zealand.They’re not quite the all-conquering force of years’ past but that doesn’t mean they’re still not the best team on the planet. I think they’ll prove that again in Japan.

Luke Brown:South Africaare the form team and appear to have peaked at precisely the right time. Their formidable squad depth in that ridiculously powerful forward pack could prove critical.

Lawrence Ostlere:New Zealand.The All Blacks have not had the perfect year, but are still the best team in the world when it all clicks into place, with a formidable first XV.

Harry Latham-Coyle:New Zealandaren’t the all-conquering force they have been in the past, but they still have probably the deepest and most talented squad, particularly when everyone gets fit.

JDM:France. With Jacques Brunel showing early signs of picking the best players and best team available to him, France could go far in this World Cup. If they beat Argentina in the pool stage, the will be a serious danger in the knockout stages. 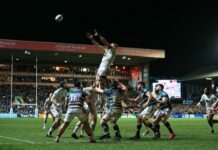 Owen Farrell Marchant to start England warm-up game despite not being...