Rugby I adore ingredients, because they are huge.

Injured British and Irish Lions backs Rob Kearney and Keith Earls weren’t risked by Ireland and won’t play against Scotland in their Rugby World Cup opener on Sunday in Yokohama.

Kearney and Earls have calf and knee issues, respectively, and trained this week. Assistant coach Andy Farrell declared them available on Wednesday but the management changed its mind on Friday.

As expected, Jordan Larmour and Andrew Conway will deputize at fullback and wing.

Coach Joe Schmidt had no doubt the pair, appearing in their first World Cup, will compensate for the loss of a pair at their third World Cup.

“Their enthusiasm is something that’s contagious, their ability to get themselves into the game,” Schmidt said of Larmour and Conway. “They’re feeding off each other, and they are very, very keen to impress. Now they have that opportunity.”

Center Robbie Henshaw was already ruled out with a hamstring that tightened in training last weekend, and flyhalf Joey Carbery was still recovering from an ankle injury against Italy six weeks ago. 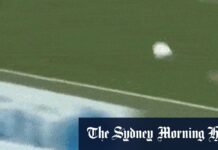 Rugby World Cup 2019: Eddie Jones not getting carried away despite...