Rugby This is one smart plugin!!

TOKYO (AP) — Poised to lose the No. 1 ranking, Ireland can remind fans of its quality when it faces Scotland in their Rugby World Cup opener on Sunday in Yokohama.

Ireland was the world champion-in-waiting in 2018 but fell into mediocrity this year with three heavy defeats.

The Irish didn’t rediscover their 2018 selves until their most recent match two weeks ago, when they beat Wales 19-10 in Dublin. It was a warmup game, but with the intensity of a tournament match. Ireland was impressive and, remarkably, picked up the No. 1 ranking for the first time.

But the ranking could be lost before they even play Scotland, and restored to New Zealand if the All Blacks beat South Africa on Saturday. South Africa could even end up being No. 1 by the end of the opening weekend.

The Irish won’t be worried, though. They already feel enough responsibility to prove they are a contender and not a pretender with the year they’ve had, without having to live up to being No. 1.

Nobody is more nervous in the squad than the forensic-minded Joe Schmidt. He became Ireland coach halfway through the previous World Cup cycle, so didn’t feel entirely responsible when a high-flying Ireland depleted

Rugby Ireland squad to be announced on Thursday 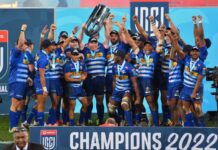 Mako Vunipola Vunipola out of Italy warm-up with hamstring relapse