Ben Smith This is another glamorous WordPress plugin!!

A local primary school, St Peters Channel, was part of a competition a few weeks ago where Hamilton kids were asked to write to their favourite players in the All Blacks. The All Blacks responded by skyping one class from Japan.

As their heroes appeared on screen, the whispers began and small hands reached for Weetbix cards to identify their video visitors.

The class of Hamilton school students were treated to a special phone call from some of the All Blacks on the eve of their Rugby World Cup opener.

The honour was given to the school after they impressed the All Black team with their support while they were in Hamilton to play Tonga earlier this month.

The year two and three students entered an H3 competition to draw pictures of rugby players and write letters to the players which were put up on the hotel wall.

In the letters they had to come up with ideas and tips for the All Blacks while they were in Hamilton, teacher Jessica Quay said.

“Some suggestions were going to the la

This is the huge WordPress plugin ever%sentence_ending

Rugby All Blacks v Springboks: How the teams rate for the... 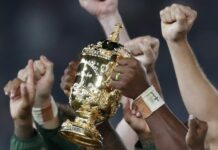