Viliame Mata This is one clever extension!!

SAPPORO, Japan (AP) — David Pocock and Michael Hooper will combine in the backrow for the first time this year when two-time champion Australia opens its Rugby World Cup campaign against Fiji on Saturday.

Pocock has missed most of the season because of injury but returned in a warmup match against Samoa and did enough to earn his place in the backrow at the expense of Lukhan Salakaia-Loto. He’ll start at No. 6 for the first time since 2016, and will become the fourth Wallaby to start at No. 6, 7 and 8 during the World Cup.

Hooper will start on the openside and Salakaia-Loto is expected to come in off the bench. Two of the best openside flankers in the game, Pocock and Hooper have regularly combined in the backrow to give Australia speed to the breakdown.

Head coach Michael Cheika picked Christian Leali’ifano at flyhalf in favor of Bernard Foley, who was one of the stars of Australia’s run to the final in 2015 but was left out of the squad to face Fiji.

“We are hungry to p

Alun Wyn Jones Why Wales defeat shows they are not yet... 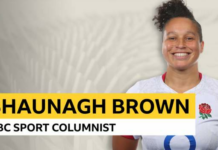