Finn Russell This is one smart extension!

At the last World Cup, the All Blacks had the best attack – i.e. the highest average points and tries scored per game.

But they also had the strongest defence, statistically speaking – i.e. the lowest average points conceded per game at 13.9.

More recent examples from other competitions underline the importance of being defensively solid. 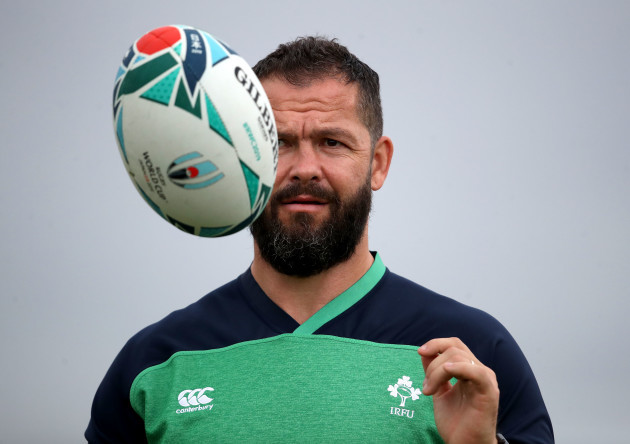 Farrell has been Ireland’s defence coach since 2016.

Super Rugby? The three-peating Crusaders had the most prolific attack, sure, but they also had by some distance the best defence.

The Premiership? Champions Saracens conceded fewer tries on average than anyone else, only trailing Exeter by 0.3 in the average points conceded category.

In Europe, winners Saracens were only very narrowly edged out by Munster as the most frugal defence, while the same was true for victors Leinster in the Guinness Pro14.

All three times Ireland have won the Six Nations during Joe Schmidt’s tenure, they have conceded the fewest points of any team.

It’s very clear that you’ve got to have a good attack to win titles, but strong defence is an important starting point.

In that light, defence coach Andy Farrell – who will succeed Schmidt as Ireland boss after this World Cup – is a crucial figure in their hopes of making history in Japan.

The opening task on Sunday is a difficult one, with Gregor Townsend’s Scotland possessing a whole lot of attacking quality in the likes of out-half Finn Russell, fullback Stuart Hogg, pinball-like openside flanker Hamish Watson, and several others.

Ireland limited the Scots to just 13 points in their most recent Six Nations meeting, but Farrell is wary of the “box of tricks” Townsend’s side can bring.

“They see the space, whether it’s in behind or out wide, they’re not shy of throwing a long ball into that space and somebody picking it up on the run. They like to play at a high tempo.

“And there will be something t

These plugins are quite unbelievable.

Ben Smith The Honest Truth About Being Raised By An Extremely...

Brodie Retallick Dogged All Blacks hold on for victory in Buenos...