Alun Wyn Jones I adore constituents, because they are unbelievable.

Shortly before 11:00 BST on Saturday, 2 November, we will have the answers.

The identity of the skipper beneath the William Webb Ellis trophy and cloud of tickertape in Yokohama.

The destinations of the flights that have headed home from Japan with indecent haste.

The men who will have become the sport’s new faces for the sporting mainstream.

But, for now, with less than 48 hours before Japan and Russia meet in the tournament’s first game, the Rugby World Cup is only posing questions.

Former England scrum-half Matt Dawson, Rugby World Cup winner in 2003, is answering them in the first of his BBC Sport columns during the tournament.

Which of the home nations will fare best?

The closer we get to the tournament, the more I fancyEngland. They are in a trio of top-tier contenders with New Zealand and South Africa.

They have a fantastic squad with terrific strength in depth across every position. What is especially striking is their raft of heavy-duty ball-carriers that will get them across the gainline and give them a foothold in any game.

The critical question will come when they come up against a team that can physically match them or force them to change strategy on the hoof.

Are their key leaders – the number eight and half-backs – able to huddle together and completely change direction tactically?

Too many times we have seen this England side struggle to put the opposition away or close out the game.

Scotland almost beat England from 31-0 down in March. Wales came back from seven points down at half-time to win in February. New Zealand did the same from 15 points back in November.

They will need to be clinical in big games if they are to go all the way.

Irelandcome into the tournament as the best team in the world in the rankings, but with the likelihood of either New Zealand or South Africa in the last eight, I don’t think they will make the semi-finals.

They were playing scintillating rugby between a year and 18 months ago, driven in a large part by hooker Rory Best, scrum-half Conor Murray and fly-half Jonny Sexton.

These constituents are quite glamorous!

Rugby No Kearney or Earls as Ireland team to play Scots... 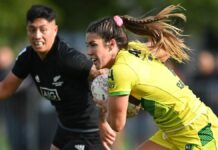 Introducing our unrivalled Rugby World Cup 2019 coverage – and how...

Ben Smith Barrett moves to fullback, Mo’unga at flyhalf for All...