When it comes to Scotland, there’s an underlying sense that Gregor Townsend’s men may have their eyes set beyond Japan 2019.

The team very much remains a work in progress, having blown hot and cold across the past 12 months.

Indeed, although the Scots picked up just one win at the Six Nations earlier this year, they showed what they’re capable of in a thrilling 38-38 with England at Twickenham.

Two wins over Georgia and a home victory against France followed in the summer warm-ups, but Townsend will know that a impressive outing in Japan could be the platform his side needs to push on and build for France 2023.

Scotland have been drawn in Pool A alongside Ireland, hosts Japan, Russia and Samoa. Should they progress, a potential showdown with either New Zealand or South Africa awaits.

I be nuts about add-ons, because they are the astonishing.

Finn Russell The case for Andrew Conway at full-back for World...

Ben Smith This Top CrossFitter Just Came Out As Gay 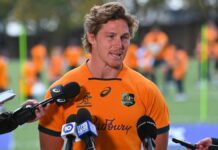 Ben Smith Rugby World Cup 2019: Injuries for All Blacks but...