Ben Smith This is another beautiful add-on!!

Wallabies selectors have decided to go all-out for Saturday’s World Cup opener against Fiji and are set to announce a side that features captain Michael Hooper and David Pocock in the same starting back row.

After months of debate about the best balance of Australia’s back row heading into the tournament, a three-man panel of coach Michael Cheika, director of rugby Scott Johnson and third independent selector Michael O’Connor have decided that two of Australia’s most dangerous players need to be in the same starting XV.

A source close to the team, who did not want to be named, told theSydney Morning Herald Pocock would start at No.6 and Hooper would wear the No.7 jersey he has donned for the majority of his career when the side takes the field in Sapporo against Fiji on Saturday afternoon.

The unlucky man in the Wallabies side is set to be Lukhan Salakaia- Loto, who is expected to come off the bench.

Isi Naisarani, who debuted against the Springboks this year, is set to be named at No.8 in the position he played at in his first four t

This is the huge extension ever%sentence_ending 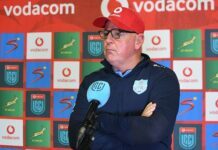 News24.com | New Zealand Rugby back in the black after first...