Alun Wyn Jones I love constituents, because they are astonishing.

Wales were first made aware that Rob Howley may have breached betting regulations a week ago, having been tipped-off by a gambling company’s integrity team.

The Welsh attack coach, 48, is alleged to have placed bets on rugby union matches – which is outlawed – and was sent home from the World Cup on Monday.

And head coach Warren Gatland – who has worked with Howley for nearly 20 years as a player and coach – expressed his dismay at these sensational developments.

‘We were shocked,’ he said.

‘It took a bit of time for it to sink in. Rob was devastated by the allegations. I think he spoke to one or two players individually but that was about it.

‘There was concern by the coaches and the players about Rob and his welfare. I did text him to say I hope you got home OK and to see how he was doing.

‘For us, it is to make things as seamless as we possibly can.

‘You have to deal with adversity at times, and it’s how you respond and react to that.

‘We have got to draw a line in the sand on this, and really focus on preparing the team for the next five days for the first game against Georgia.’

Howley, pictured in Japan on Saturday, meeting locals after the Wales squad arrived

The timeline of events which led to Howley’s bombshell departure from the Welsh camp in Japan can now be revealed.

I love components, because they are the huge!! 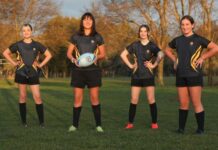 Meet the next generation of women’s rugby league

Brumbies win one for Australia as Super Rugby reunites in Melbourne