Brodie Retallick This is another awesome component!!

All Blacks coach Ian Foster has reinforced the need for his side to start the World Cup in the right away against South Africa on Saturday, saying a good performance would put down a marker for them.

What was left unsaid was the fact it will also show the other contenders what they are up against and an excellent performance from the defending champions would be a significant mental blow.

He also poured cold water on what appears to be a provocative attempt from the South African camp to create a little intrigue over the injury status of lock Brodie Retallick, who is recovering from a dislocated shoulder suffered in the draw between the two teams in Wellington in July.

Springboks assistant coach Matthew Proudfoot flew a metaphorical kite today when he said he wouldn’t be surprised if Retallick played against his side in Yokohama despite the All Blacks repeatedly saying the key forward wouldn’t be available until the final pool game against Italy at the earliest.

“I do not know why Matthew would think that,” Foster said.

“I really don’t know. He [Retallick] is quite hard to hide from you guys – he’s a six foot nine mon

This is the magnificent module ever%sentence_ending 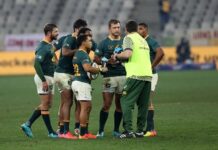 Gutsy defending takes Sharks over the line against tough Leinster

Rugby Rugby Referee Creates a Buzz While Keeping the Peace