Ben Smith This is one helpful item!

Ian Foster says South Africa is the team the All Blacks get on with best despite the brutal on-field clashes.

All Blacks assistant coach Ia Foster has laughed off suggestions from the Springboks that star lock Brodie Retallick will play against them in the Rugby World Cup opener.

Springboks assistant coach Matt Proudfoot suggested Retallick would make a miraculous recovery from his shoulder injury and make an appearance in Yokohama on Saturday night.

“Steve Hansen said they had a full squad to pick from, that was his last press release so I wouldn’t be surprised if they have a little trick up their sleeve,” Proudfoot said.

Retallick hasn’t played since Springboks replacement lock RG Snyman dislocated his shoulder with an illegal clean out during the 16-all draw in Wellington two months ago.

Foster was dubious about the Proudfoot claim.

“I do not know why Matthew would think that,” he told reporters in Tokyo.

“I really don’t know. He [Retallick] is quite hard to hide from you guys – he’s a six foot nine monster, so we haven’t been sneaking him into training or anything like that. He is progressing really, really strongly.”

“I’m pretty sure he won’t be there on Saturday,” Foster said smiling. “But who knows?”

These extensions are quite huge. 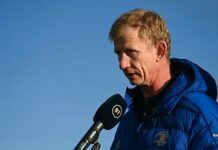 Beauden Barrett He’s only 8 but Lote Shanley calls a good...