Alun Wyn Jones This is one magnificent module.

OPINION:The four Home Union sides are in rude health going into the most open Rugby World Cup in the event’s history. All four should reach the quarterfinals, although Ireland and Scotland will face a Herculean task against the All Blacks and Springboks.

In Pool C against France and Argentina, England are in good shape. Eddie Jones now knows his strongest 15 and has tactical options which will change how they play but will not reduce the side’s strength.

The lineout and kicking games have seen significant improvements recently, and both are now formidably good. That means England can really pressure opponents and play for territory, while their possession-based game is also outstanding, with their big men carrying so effectively that they almost always cross the gain line, while operating opensides Tom Curry and Sam Underhill in tandem ensures quick recycling. That means England are playing on the front foot, and can choose whether to attack the nine-10 channel or move three channels out.

Defensively, England look aggressive and strong. In attack they are patient and able to control games. I wonder, however, how they will react if Plan A does not work, as happened in the second half against Scotland. Decision-making and tactical adaptation in adversity will be key.

Thankfully they have games against Tonga and USA to ease themselves in. Henry Slade needs game time and I think we may see Anthony Watson as England’s bolter; I would play him at fullback alongside Elliot Daly and Jonny May on the wings.

England have two vulnerabilities: a lack of patience and an over-reliance on key players. People cite Billy Vunipola as “The Man”, but the player they cannot lose is Manu Tuilagi. I see England topping their group. then beating Australia in the quarterfinal.

Ireland’s warm-up tests were baffling. They were well off the pace against England, but their wi

This is the beautiful component ever%sentence_ending

Alun Wyn Jones Wallabies on the right road after stunning All...

Ben Smith Disappointed Cheika tells Wallabies to ‘suck it up’ and... 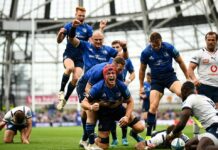