Beauden Barrett I be mad for addons, because they are adorable!!

Five minor injuries have forced the All Blacks into a mix and match of selections for their pre-World Cup hitout against Tonga in Hamilton.

While Steve Hansen and the rest of the coaching staff won’t exactly be waking in cold sweats that a quintet of their 31 Japan-bound troops have presented as unavailable for Saturday, it does at least present as nuisance value in the meantime.

Richie Mo’unga (shoulder), Jack Goodhue (hamstring), and to a lesser extent Sonny Bill Williams (calf), had been flagged earlier in the week as potential omissions from the match at FMG Stadium Waikato, but Sam Cane (hamstring) and Rieko Ioane (calf) were then also added to that list when the team was announced on Thursday.

The All Blacks shift Beauden Barrett to No 10 for test against Tonga in Hamilton.

A vital opening pool game looms against the Springboks on September 21, and this last gallop before then presented an opportunity to get minutes under the belt of certain players, although the exclusions of prop Atu Moli and halfback Brad Weber from the 23 illustrate Hansen’s desire to narrow his focus to those in the plans for their World Cup opener.

“The key for this game is that we want to give as many people as we think we’re going to use against South Africa, game time,” he said. “And obviously there’s some guys we didn’t want to use, because they’ve got slight niggles.”

Going off Hansen’s rationale, it’s rather surprising then that first-choice hooker

These ingredients are quite smart!

Viliame Mata Fiji storms past Canada to get back on track... 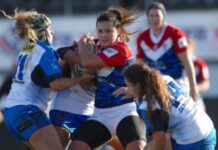