Rugby This is one beautiful item!!

Top of the world ma. Not perfect, but much more like it. Far from derailed, Ireland duly completed a deserved double over Wales with their most impressive warm-up performance of the four. That, along with ensuring a fitting send-off, not least for Rory Best and Joe Schmidt on their final home game and, eh, securing the world’s number one ranking for the first time, would do nicely.

“This place has been unbelievably special for me over many many years. The support we got today summed up the support we’ve got throughout my career,” said an emotional Best to the crowd on field. He thanked his teammates, his family and said it was nice to “finish with a performance we can be proud of” and “a very efficient performance against a quality side.”

He could not let the moment pass without paying tribute to Schmidt. “With Ireland he has transformed the game here and I’ve been very privileged and I can’t be grateful enough for what Joe Schmidt has done for me,” he said.

With that, the crowd were encouraged to roar their appreciation for the two departing men, and Best was given one more guard of honour by the squad and his kids.

For his part, Schmidt said: “It’s been a privilege to be involved. The last 10 years have been a heck of a ride and I’ve been lucky enough to be involved with such a special bunch.”

In thanking the support of his management and players, he began to choke up a little. Schmidt signs off with a home record coaching Ireland of played 34, 28 wins, one draw and five defeats. Add in Leinster and it reads: Played 86, 75 wins, one draw and just 10 defeats.

“There is fantastic character in the team. We just rolled our sleeves up and made the most of slow ball,” he added.

There may have been too much slow ball for the perfectionist’s liking but on top of a physically dominant display, finishing the stronger against a side renowned for their fitness and resilience must have been very pleasing for him, Jason Cowman and the rest of the conditioning staff. Aside from not adding another try in their final salvo, the main blemish was the sight of Keith Earls limping off while Cian Healy didn’t not return after undergoing an HIA at half-time.

“I think Cian is fine and I’m not sure about Keith yet,” said the Irish head coach.

There were a couple of early lineout wobbles, which prompted audible groans of concern amongst the home support, but it worked pretty smoothly thereafter, both before and following the re-jigging from the bench. The Irish scrum also came through a royal battle which, as ever, was well refereed by Mathieu Raynal.

Ireland’s emphasis on physicality in finalising their World Cup squad was manifest in the grunt provided by Tadhg Furlong, Jean Kleyn, CJ Stander, Jack Conan and, in particular, Bundee Aki and Robbie Henshaw, across the line. It’s not often that teams go mano a mano in this manner with Wales, and as a result Conor Murray and Johny Sexton, who both looked in good nick along with the returning Henshaw and Earls, were also able to generate quite a high tempo.

There was also variation in Ireland’s attacking game, be it offloads in midfield where the outstanding Aki and Henshaw seamlessly revived their old Connacht understanding, and in Sexton’s long and short kicking game.

Another definite boon was the performance of Rob Kearney. Much better than at Twickenham under the high ball with a couple of confidence-boosting early takes, but again demonstrating his passing game, Kearney looked sharp, fit and quick. He saved one try, helped to prevent another and ended a run of 25 tests dating back to the pool deciding win over France four years ago with an excellent finish.

Ireland’s Call had ended with Sexton giving Best an affectionate pat. Plenty of eyes were also on Kleyn, and his first act was to push up too quickly from Wales’ second recycle. But Leigh Halfpenny surprisingly missed the 40 metre penalty. The juices were flowing a little too much, and Sexton did his team no favours by sending his restart out on the full.

In what looked like a pre-planned move, Tomos Williams went left off the solid scrum but reverse passed to the right, where Halfpenny chipped in behind for George North. Kearney read the situation and covered across quickly to prevent the try. Ireland put in a couple of good defensive

My grandpa says this plugin is very elegant!! 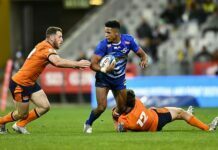 News24.com | WATCH | Inside the Stormers changeroom for a Johnny...